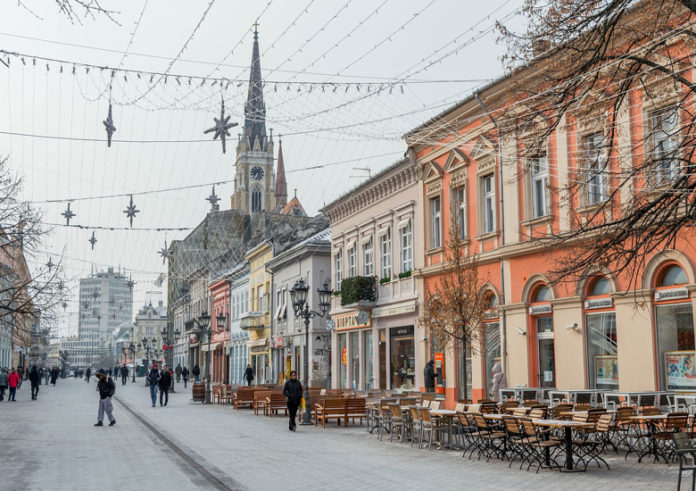 Novi Sad  is the capital of Vojvodina, the northern Autonomous Province of Serbia, and the second largest city in Serbia.

Situated on the Danube River between Budapest and Belgrade, it is a treasured regional and cultural centre. Novi Sad has a population of around 300,000 people. History : The area of Novi Sad was inhabited since the distant past – the found remains of old settlements date back to the Neolithic period (5000 BCE). Before the middle ages, the region was inhabited by different tribes, including Celtics, Romans, and Huns. Slavic tribes (including Serbs) settled the region around Novi Sad mainly in the 6th and 7th century. The region was under the medieval Kingdom of Hungary in the 11th and 12th century and afterwards under the Ottomans from 1526 until 1687, when Habsburg Monarchy took over the control.

The settlement was declared a “free royal city” by the Habsburg empress Maria Theresa in 1748, and it gained its present names Novi Sad, Ujvidek, and Neoplanta, meaning “new plantation” in Serbian, Hungarian, and Latin, respectively. For much of the 18th and 19th centuries, this was the largest Serb-inhabited city in the world, part of the Austro-Hungarian Empire until the end of World War I in 1918, when it became part of Kingdom of Serbia. During World War II, it was under Hungarian occupation.

After the World War II, the city went through rapid industrialization and its population more than doubled in the period between World War II and the breakup of Yugoslavia after the fall of the Soviet Union. Devastated by NATO bombardment that lasted 78 days during the Kosovo War of 1999, Novi Sad was left without any of its three Danube bridges, and with significant damage to its infrastructure including communications, water, and electricity. Residential areas were cluster-bombed several times while its oil refinery was bombarded daily.

Today, Novi Sad has mostly recovered from the nineties and it has grown strongly since 2001, shifting its economy from industry-driven to the tertiary sector. It is home of the national headquarters of numerous banks, third largest insurance company in Serbia, and major energy companies. Novi Sad is also a growing information technology center in Serbia.

Climate : Novi Sad has continental climate, with four distinct seasons. Winters are cold, with temperatures being below zero for a couple of weeks per year, often accompanied with snow (which stays for a couple of days or more at a time). The first snow usually falls in late November/early December. Springs are short and rainy. On the first warm and sunny day after the winter, usually in March, people of Novi Sad come out to the city centre to have a drink in a cafe in Zmaj Jovina street, or take a walk on the promenade next to the Danube river.

Summers often arrive abruptly, with temperatures above 25°C being very common, starting as early as May. If the weather becomes too hot, you can have a swim at Strand, a very well-maintained public beach on the river Danube, popular by the locals. If you want to have a proper swim, outdoor pool at Spens is an option, go early in the morning to avoid the crowds. Short heavy rains occur from time to time in the summer, cooling the air for a couple of hours. The weather remains warm until the middle of September or later.

Autumns arrive usually by the beginning of October, and are not too cold, with the temperatures between 10 and 20°C. The rain is not uncommon in this period, however there are many sunny days too. The leaves changing the colours and falling from the trees make Novi Sad quite beautiful, especially in the parks and on the promenade next to the Danube river.

Access : Coordinates: 45.25, 19.85 / Novi Sad has good transport connections with nearby cities thanks to its great position. It is located about 80 km to the northwest of Belgrade, about 300 km from Budapest, 424 km from Ljubljana, 309 km from Zagreb, 548 km from Podgorica, 480 km from Sofia, 150 km from Timisoara (Romania), 100 km from the border town (with Hungary) of Subotica and about 100 km from the Romanian border town of Jimbolia.
By plane : Novi Sad doesn’t have an airport and the closest one is in Belgrade (about 70 km away). Some taxi companies run regular cars between Belgrade Airport and Novi Sad, e.g. Autoturist tel. +381 63 504 587, Belgrade Airport Transfer. Other useful airports with low-cost flights might be Budapest’s one (247 kilometers from Novi Sad, serving numerous low-cost airlines, the best way to get to Western/Northern Europe by plane), and Timisoara’s one (126 km away, serving Wizzair
By train : Novi Sad located on the railway line connecting Budapest (6 hours) and Belgrade (2 hours). Trains also pass Subotica. Train station, Bulevar Jase Tomica 4,  +381 21 420700. By bus : Within Serbia, Novi Sad is connected by bus to all other major cities. The most frequent route is the one from Belgrade, with buses leaving every 15 minutes during peak hours and a total of nearly 100 journeys each day in each direction.

Internationally, the city has frequent bus connections to Sofia in Bulgaria, Budapest in Hungary, Zagreb, Vukovar, and Osijek in Croatia, Sarajevo and Banja Luka in Bosnia and Herzegovina, and Budva, Tivat, Podgorica, Herceg Novi in Montenegro. It is also reachable from Germany and Austria. For urban, domestic long-distance and international bus timetables in Serbian and English, visit the web site of JGSP Novi Sad, the city public transport company at . 2 Central bus station, Bulevar Jase Tomica 6 (near the train station)

By car : E-75 highway that connects Belgrade and Budapest passes by some 5 km from Novi Sad. Toll fare for passenger cars coming from Belgrade is RSD 240. Prices for other types of vehicle (bus, truck) are higher. If you want to go in the direction of Zagreb, Ljubljana take E-70 highway which is some 40 km southwest of Novi Sad.

By bike :  The cycling route EuroVelo 6 connects Novi Sad to Hungary and to Belgrade by following the Danube river. Novi Sad has dedicated cycle-paths along most of its avenues.

Get around : On foot :  The city centre is quite small and most of the interesting sights, bars and hotels are all within easy walking distance. There are plenty of street maps, especially in the centre, so you can find your way easily.
By taxi :  Taxis are not overly expensive (by Western standards), the minimum fare varies between RSD 80 and 100, with a cross-city trip typically costing RSD 150-200. It helps to have the address written out although many taxi drivers speak fair, sometimes even excellent, English. However, be careful of taxis unaffiliated with one of the major firms (especially at the train station), or you may pay up to four times more than your fare should be. Some good taxi companies: Pan, Vojvodjani, SOS, Delta, Novus, Nas, Lav.
By bus :  Novi Sad has an excellent bus service. Ticket for one ride (no matter how far you go as long you don’t change the bus) costs RSD 55 and is bought from the driver.

Attractions : 1 Fortress of Petrovaradin (On the right bank of the Danube). A fortress that no enemy has ever taken, it now contains a museum, “Muzej Grada Novog Sada” (Novi Sad City Museum) gathering all ancient objects of the region from the prehistorical era until today, large number of small art studios and living spaces of artists, underground military galleries – corridors, few clubs and few cafes and a delicatessen. It also has a small Observatory and Planetarium, open on Saturdays from 7PM-midnight. The observatory is open when skies are clear, while the Planetarium, which is near the Museum, is open every Saturday. The staff are young, fun and speak excellent English. The 5* hotel and three restaurants offer beautiful views of the Danube and of Novi Sad, and have recently been reopened, after extensive renovation and refurbishment works.
2 Old Town Hall, Trg Slobode.
3 Church of the Great Martyr St. George, Pasiceva street. Serb Orthodox church Saint George’s Cathedral (Novi Sad)
4 Name of Mary Church, Trg Slobode. Catholic church
5 Novi Sad Synagogue, Jevrejska street. Beautiful synagogue in the center of the city Novi Sad
Museums :  6 Foreign Art Collection, 29 Dunavska. Tu-Su: 9:00-16:00. M closed. This is the largest museum collection of foreign art in Serbia. In 1966, Doctor Branko Ilic donated his art collection of 136 paintings of foreign artists, 279 pieces and sculptures, period furniture and other items of applied arts to the town of Novi Sad and the Province. The legacy consists of the works of Western European schools from the 16th century until the end of the 19th century, mostly from the area of Central Europe (France, Germany, Italy and Austria).
7 Vojvodina Museum, 36-37 Dunavska St,  +381 420-566, +381 526-555. 9:00-19:00 on working days, closed on Monday, 09:00-14:00 on weekends. Entry price for foreigners RSD 100, or RSD 200 with an English speaking guide. Vojvodina from Paleolithic up to the XX century. Also, there’s Dinaric Ethnic house “Brvnara” in Backi Jarak (15 kilometers north from Novi Sad).  Nearby :
8 Dvorac Dundjerski. Old wonderfully preserved castle, situated to the north of Novi Sad.

Activities : EXIT Festival. July. This festival, founded in 2000 as an onset to the democratic revolution in the country, attracts more and more visitors every year. It has a wider variety of music genres such as Rock, Dance, Reggae, Hip-Hop, Folk, and Techno. Many world famous bands played on the festival (Slayer, Moloko, Iggy Pop, Snoop Dogg, Wu-Tang-Clan, Public Enemy, Billy Idol, Pet Shop Boys, The Cult, HIM and many DJs from around Europe and Asia) and in 2004 it was listed as the biggest cultural event of South-Central/Eastern Europe.
A stroll around the city’s imposing boulevards and along the Danube river, for example the route Kralja Aleksandra – Trg Slobode – Zmaj Jovina – Dunavska – Beogradski Kej – Kej Zrtava Racije
If the weather is nice, sit down at one of the cafes around Spens and enjoy
The Mountaineering club Naftas usually organizes a hike on Saturday or Sunday on Fruska Mountain and in the Novi Sad vicinity.  mailto:prilozi@pdnaftas.org.rs GPS tracks of regular hiking paths is available on PD Naftas website.
The Zeleznicar Association of mountaineers and skiers organizes a hiking trip every Sunday on Fruska Mountain and in the Novi Sad vicinity. Trg Galerija 4, 529 978 mailto:zeleznicar.nsad@neobee.net
Must visit in summer – “Strand” – means beach, the most beautiful sand beach on the Danube river! It is open usually 15 May-15 Sep.