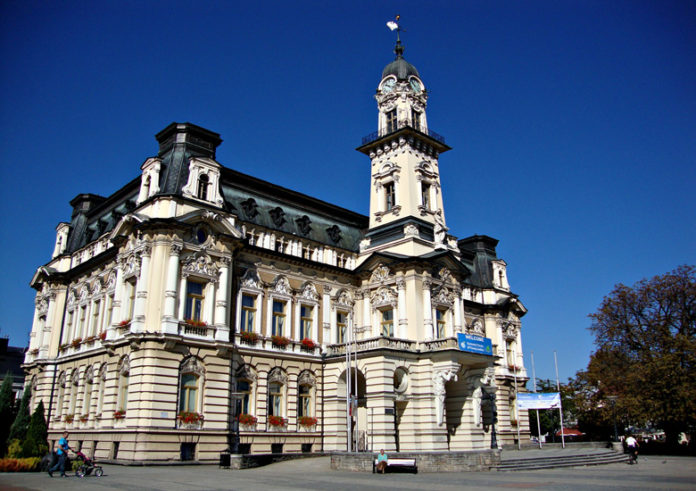 New Sacz  is a city in the Lesser Poland Voivodeship of southern Poland. It is the district capital of New Sacz County as a separate administrative unit. Founded by the Duke of Cracow on 8 November 1292, New Sacz (known also by other names) is one of the oldest cities in the Lesser Poland region, with a population of around 84,000 as of 2014. History : Nowy Sacz was founded on 8 November 1292 by the Bohemian king Wenceslaus II, on the site of an earlier village named Kamienica. The foundation of New Sandec took place due to the efforts of Bishop of Cracow, Pawel z Przemankowa, who owned Kamienica. Upon request of the bishop, Wenceslaus II granted it Magdeburg rights, making it the only Polish town founded by the Bohemian king. Its name was taken from the nearby town of Stary Sacz. As early as 1329, the name was spelled Nowy Sandacz.

In the 14th and 15th century Nowy Sacz emerged as one of the most important economic and cultural centers of this part of the Kingdom of Poland. The town benefited from its proximity on the trade route to Hungary due to privileges granted by King Wladyslaw I the Elbow-high, and later his son, Casimir III the Great, for supporting him during the Rebellion of wojt Albert in 1311-1312. During these times, the majority of the town’s inhabitants were German colonists. In the 15th century it produced steel and woolen products, and nearly rivaled Krakow in visual arts. In 1329, New Sandec signed a treaty with Krakow, upon which Krakow merchants, on their way to Hungary, had to stop at New Sandec; New Sandec merchants, on their way to Gdansk, were obliged to stay at Krakow. In the mid-14th century, King Casimir the Great built a royal castle here and surrounded the town with a defensive wall. Nowy Sacz was the seat of a castellan and a starosta, becoming an important point in the system of defense of southern border of Poland. The town was further elevated in 1448 when Bishop Zbigniew Olesnicki promoted a local church to the status of a Collegiate.

Nowy Sacz prospered in the Polish Golden Age (16th century). It was an important center of the Protestant Reformation. Local leader of the Polish Brethren, Stanislaw Farnowski, was very popular among local nobility. Good times ended in the 17th century. In 1611 a great fire destroyed much of the town, and during the Swedish invasion of Poland, the town was captured by the Swedes (late 1655), who burned and looted it. Nowy Sacz was a center of the rebellion against the invaders. Partitions of Poland :  The decline of the town continued in the 18th century, when Nowy Sacz suffered more destruction during the Great Northern War and the Bar Confederation, when the castle was burned. In 1772, during the Partitions of Poland, the town was annexed by the Habsburg Empire as part of Galicia, where it remained until November 1918. Nowy Sacz rose to a new prominence in the 19th century when the Austrian authorities built a railway connecting it with Vienna (1880s). New Sandec was the seat of a county, new buildings were opened, the town was a rail hub with a large rail repair shop opened in 1876.

On April 17, 1894, the central part of Nowy Sacz burned in a fire, with a town hall and ancient town records. At that time, the town was important in Hasidic Jewish history for the founding of the Sanz Hasidic dynasty during the 19th century, the precursor to the Bobov dynasty founded in nearby Bobowa (with a synagogue with occasional services by Cracow congregation) and the Klausenberg dynasty. World wars : At the beginning of World War I, Nowy Sacz was occupied by the Russian Army. The Russians were driven back by the Central powers in December 1914. Briefly after the end of the war, it was associated with the short-lived independent Lemko Rusyn People’s Republic, established by members of the Lemko (a subgroup of ethnic Rusyns native to the Beskid Niski). The inter-war Poland saw industrial expansion and the railroad factory expanded. In 1936, the Museum of Sandec Land was opened in the restored royal castle, and in 1939, the population of New Sandec was 34,000.

During the invasion of Poland starting World War II, Nowy Sacz was occupied by Nazi Germany on 6 September 1939. Because of its proximity to Slovakia, it lay on a major route for resistance fighters of the Polish Home Army. The Gestapo was active in capturing those trying to cross the border, including the murder of several Polish pilots. In June 1940, the resistance rescued Jan Karski from a hospital there, and a year later 32 people were shot in reprisal for the escape; several others were sent to concentration camps.

The regional Jewish community numbered about 25,000 before World War II, and nearly a third of the town’s population was Jewish; ninety percent of them died or did not return. The Nowy Sacz Ghetto for around 20,000 Jewish people was established by the German authorities near the castle. Its inhabitants were deported aboard Holocaust trains to Belzec extermination camp over three days in August 1942 and murdered. Across the river in the Jewish Cemetery, 300-500 Polish people were executed for their participation in the sheltering of Jews. The Red Army fought its way into the city on 20 January 1945. At war’s end, about 60% of the city had been destroyed. Nowy Sacz was honored for its heroism with the Cross of Grunwald, third class in 1946. In 1947 much of the Lemko population, living in villages southeast of the town, was deported in Action Vistula (mostly to land recently annexed from Germany) in reaction to the nationalist Ukrainian activity in the region.

Access : Coordinates: 49.633333, 20.716667 / By bus :  There are buses from Krakow leaving from the bus station next to main railway station (MDA). Buses are frequent and cover the distance to Nowy Sacz in approximately 2 hours and tickets cost 14 zl. Most bus connections are operated by the company Szwagropol. By train :  Trains from Krakow depart every two hours and take three and a half hours to get to Nowy Sacz. Tickets from Krakow cost 15 zl. From Tarnow the journey takes two hours and costs 10 zl. The 1 Nowy Sacz train station is located about 2 kilometers south of the historic centre.