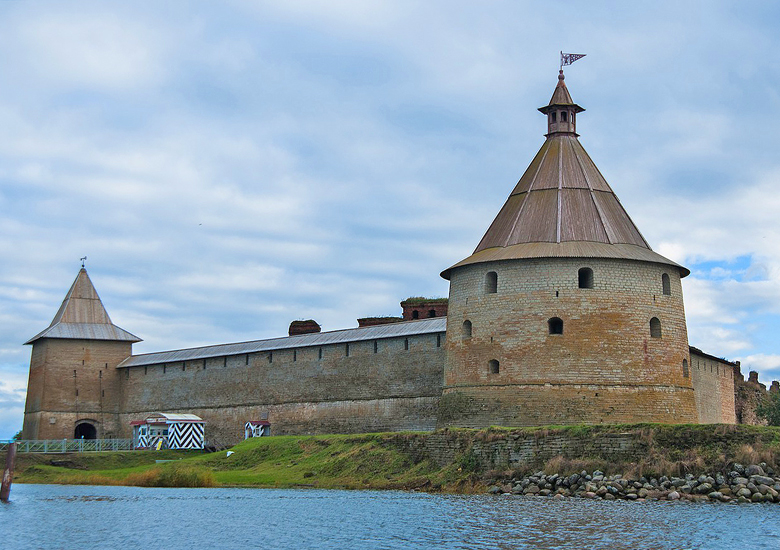 A wooden fortress named Oreshek  or Orekhov  was built by Grand Prince Yury of Moscow (in his capacity as Prince of Novgorod) on behalf of the Novgorod Republic in 1323. It guarded the northern approaches to Novgorod and access to the Baltic Sea. The fortress is situated on Orekhovets Island whose name refers to nuts in Swedish as well as in Finnish (Pahkinasaari, “Nut Island”) and Russian languages. After a series of conflicts, a peace treaty was signed at Oreshek on August 12, 1323 between Sweden and Grand Prince Yury and the Novgorod Republic. This was the first agreement on the border between Eastern and Western Christianity running through present-day Finland. A modern stone monument to the north of the Church of St. John in the fortress commemorates the treaty. In 1333 Novgorodians invited Lithuanian prince Narimantas to govern their north-western domain. Narimantas appointed his son, Alexander Narimuntovich to rule the autonomous Principality of Oreshek.

In 1348 king Magnus Eriksson attacked and briefly took the fortress during his crusade in the region in 1348–1352. It was largely ruined by the time the Novgorodians retook the fortress in 1351. The fortress was rebuilt in stone in 1352, by Archbishop Vasily Kalika of Novgorod (1330–1352), who, according to the Novgorod First Chronicle, was sent by the Novgorodians after several Russian and Lithuanian princes ignored the city’s pleas to help them rebuild and defend the fort. The remnants of the walls of 1352 were excavated in 1969, and can be seen just north of the Church of St. John in the center of the present fortress.

In 1478 the Novgorod Republic was absorbed by the Muscovy who immediately started to strengthen their border with Sweden. The existing small citadel was demolished and a new stone fortress with seven towers was constructed, which occupied almost the complete island. The old Novgorodian basement was used to construct a new citadel with three towers inside the outer walls. The total length of the walls was about 740 meters. Their height up to 12 meters, and the width at the basement 4.5 meters  The towers were 14-16 meters high and 16 meters in diameter at the basement. This made it the strongest Russian fortress of that period. The residents were forced to resettle on the mainland and most preferred the Southern bank of Neva for safety reasons .

In 1554-1555, during the Russo-Swedish war, The Swedes laid siege to the fortress, with no success. In response, Muscovites besieged Vyborg, with no success either . During the Livonian war, in 1582 Swedish troops led by Pontus De La Gardie almost captured the fortress. After a row of artillery fire they managed to break into one of the towers, but were later repelled by Muscovites .

The fort was captured by Sweden in 1611 during the Ingrian War after nine months of siege, when the defenders lost every 9 men of 10. As part of the Swedish Empire, the fortress was known as Noteborg (“Nut-fortress”) in Swedish or Pahkinalinna in Finnish, and became the center of the north-Ingrian Noteborg county (slottslan). During that time very little was done to maintain the fortress in good order, and the experts coming to Noteborg to do inspections warned the crown of its deterioration.

During the Ingrian Campaign of tsar Alexei Mikhailovich in June 1656 the fortress came under a siege by voevoda Potyomkin which lasted until November 1656 with no success.

In 1702, during the Great Northern War, the fortress was taken by Russians under Peter the Great in an amphibious assault: 440 Swedish soldiers defended the fort for ten days before surrendering. After heavy artillery fire and 13 hours of fighting inside the fortress, the Swedish commandant finally agreed to capitulate on honorable conditions. The Swedes left the fortress with their flags, rifles and four cannons. The Russian forces numbered 12,500 men and sustained a total of 1,500 casualties, compared to 360 for the Swedes.{see Siege of Noteborg (1702}.

Peter renamed the fortress to Shlisselburg, a transliteration into the Cyrillic alphabet of Schlusselburg. The name, meaning “Key-fortress” in German, which refers to Peter’s perception of the fortress as the “key to Ingria”.

During Imperial times the fortress lost its military role and was used as a notorious political prison. Among its famous prisoners were Wilhelm Kuchelbecker, Mikhail Bakunin and, for thirty-eight years, Walerian Lukasinski. Ivan VI was murdered in the fortress in 1764, and Lenin’s brother, Aleksandr Ulyanov, was hanged there as well. It was informally known as the Russian Bastille. Immediately after the Russian Revolution of 1917 the prisoners, both political and criminal, were released, and set the prison on fire.

In 1928 the fortress was turned into a branch of the Museum of the October Revolution, but in 1939, shortly before the war, it was closed and the exhibits were moved to Leningrad.

Shortly before Shlisselburg was occupied by the German troops (8 September 1941), a garrison of 350 Red Army soldiers was sent to the fortress on Orekhovets island to bring supplies and munition to the frontline. The garrison held the abandoned castle for 500 days preventing the Germans from landing there and cutting the last transit route from Leningrad to the mainland. Food and supplies were brought from the northern bank of the Neva which remained under Soviet control. Heavy artillery fire by the Germans destroyed all the buildings inside the fortress and part of the outer towers and walls, but despite numerous attempts the fortress was not captured. During Operation Iskra (18 January 1943) the siege of the fortress was lifted.

The war completely devastated the fortress. Out of original ten towers, the fortress retains only six (five Russian and one Swedish). The remains of a church inside the fortress were transformed into a memorial to the fortress’s defenders. An archaeological site was established in the fortress during 1968-1975 that excavated what remained from the ancient Novgorodian stone fort dated 1352 and other artefacts. The fortress has been the site of an annual rock concert since 2003. There is also a museum of political prisoners of the Russian Empire and a small collection of World War II artillery. Renovation of the walls and towers is slow, although still underway. A stone monument in memory of the first Russo-Swedish peace treaty (1323) was placed inside the fortress.

Access : Coordinates: 59.9538123485926, 31.038544178009 / The fortress is located on the island. It can be reached by ferry,Bus No. 575 from “Ulitsa Dybenko” Metro station to Shlisselburg. Ferry to the Orekhovyi island leaves from pier, situated on the crossroad of Novoladozhskii kanal and Chkalova Street.
Tours on meteor from St Petersburg to Oreshek Fortress are executed by Petrhov-Express Company (the pier is situated 2 Admiralteiskaia Embankment, near Dvortsovyi bridge) and Nevskaya Klassika (the pier is situated 18 Dvortsovaya Embankment, across Moshkov Lane). Duration of this tour is 5 hours. / Address : ulitsa Novoladozhskogo Kanala 4-5, Shlisselburg, Russia 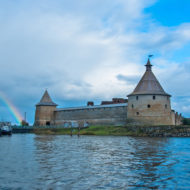 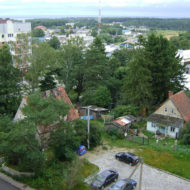