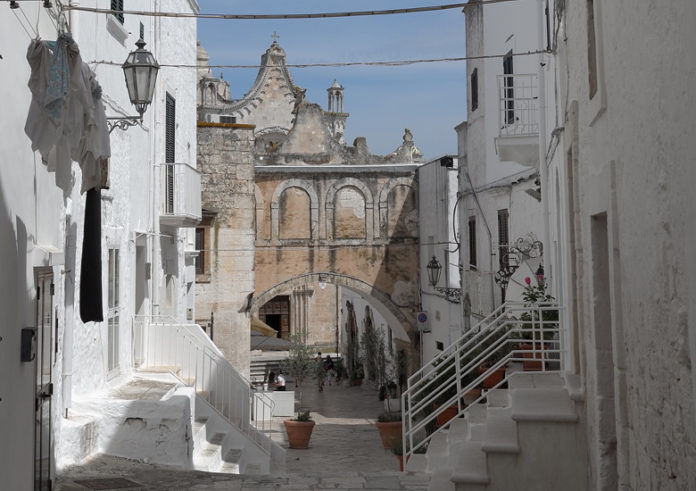 Ostuni  is a city and comune, located about 8 km from the coast, in the province of Brindisi, region of Apulia, Italy.

The town has a population of about 32,000 during the winter, but can swell to 100,000 inhabitants during summer, being among the main towns attracting tourists in Apulia. It also has a British and German immigrant community and an industrial zone. The region is producer of high quality olive oil and wine. History : The region around Ostuni has been inhabited since the Stone Age. The town is reputed to have been originally established by the Messapii, a pre-classic tribe, and destroyed by Hannibal during the Punic Wars. It was then re-built by the Greeks, the name Ostuni deriving from the Greek Astu neon (“new town”).

Sacked after the fall of the Western Roman Empire, in 996 AD the town became part of the Norman County of Lecce .The Normans built their medieval town around the summit of the hill (229 m), with a castle (only remains can be seen) and city walls with four gates. From 1300 to 1463 it was part of the Principality of Taranto and from 1507 (together with what is now the frazione of Villanova and Grottaglie) passed to Isabella, Duchess of Bari, wife of Gian Galeazzo Sforza, Duke of Milan.

Under Isabella’s rule, Ostuni thrived during the Italian Renaissance. Isabella protected humanists and people of art and letters, including bishop Giovanni Bovio. She died in 1524 and Ostuni passed as a dowry to her daughter Bona Sforza, wife-to-be of Sigismund I of Poland, King of Poland. During Bona Sforza’s government, Ostuni continued to enjoy a stable rule. In 1539 she had towers built along all the shoreline as protection against anticipated attacks from Turks who controlled the Balkans. These towers (still extant, including Pozzella Tower, the Pylon, Villanova and others), were garrisoned and communicated using fiery beacons.

By train :  Ostuni railway station is 2 km east os the historic centre, in the commercial area. Here Intercity and regional trains arrive from Brindisi (20 min), Lecce (45 min) and Bari (50 min), as well as Frecciabianca trains from Ancona (about 5 hr) and Bologna (8 hr), running along the Adriatic railway line. Services are provided by the national company Trenitalia.

Ferrovie del Sud Est from Brindisi (50 min) and Bari (2 hr).
Flixbus from 14 destinations including Aix-en-Provence, Nimes, Rijeka, Zurich and main Italian towns.
Marino Bus from various cities of Italy, Austria, Germany, Luxembourg, Spain and Switzerland.
By car
From Bari: SS 16  freeway towards Brindisi for 80 km (49 mi) and you will arrive in the very centre of Ostuni. (1 hr)
From Brindisi: SS379 freeway until the exit “Ostuni” (near the coast), then Strada Provinciale 21 to reach the old town. (½ hr)
From Lecce: SS613 Italia. freeway until Brindisi and continue on SS16 Italia. to bypass its centre, then follow the route described above. (45 min)
From Taranto: SS 7 Italia. until the exit “Francavilla Fontana”, then drive along Strada Provinciale 28 Italia. (45 min)

Go next : Alberobello / Brindisi ( you can take a ferry to reach  Greece ) / Lecce / Monopoli / Taranto