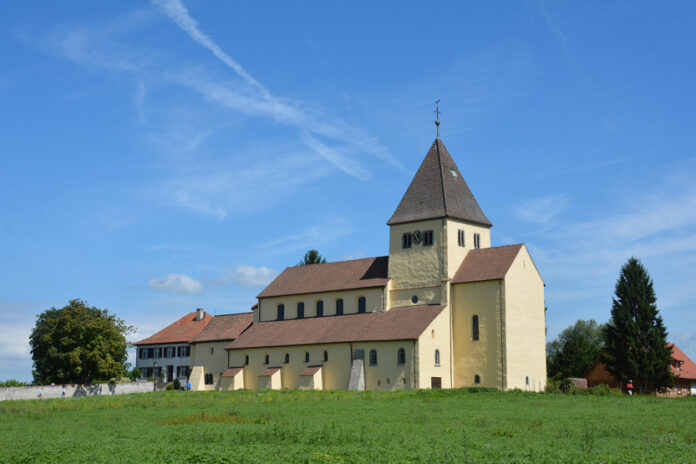 Reichenau Abbey  is a Benedictine monastery on Reichenau Island on Lake Constance (Bodensee). in Baden-Württemberg, Germany.

The Benedictine monastery was founded by Pirmin in 724. Illustrated manuscripts were written in Reichenau in the 10th-11th centuries. The missionary activity of Cyril and Methodius in Eastern Europe is connected with him.
In the 18th century, the Christian monastery began to flourish. Then there were about 20 churches and chapels in it. Three Romanesque temples have survived to this day.
the abbey appeared on the island among still pagan territories, quickly grew and became rich, and also created a unique collection of manuscripts, which have been preserved and today the Karlsruhe library contains 267 parchment and 162 paper manuscripts, as well as 212 fragments and incunabula – both books, that the monastery itself, both of these objects were included in the list of the World UNESCO heritage, because from the very beginning of the 9th to the first years of the 12th century, the world’s largest monastic library was located here.

The monastery was included in the list of UNESCO World Heritage Sites in 2000 . According to UNESCO in its justification, the island is an outstanding testimony to the religious and cultural role of a large Benedictine monastery in the Middle Ages. Today tourists traveling around the region and  come to hotels on the island of Reichenau.

Access : Coordinates: 47.6989, 9.0624 / By car : The districts of Lindenbühl and Waldsiedlung are on the B33. From this the L 221 branches off and leads over the Reichenauer Damm to the island. The dam has a cycle and footpath that is separate from the road. / By bus :
Line 7372 Reichenau ( Island ) – Reichenau train station – Konstanz-Wollmatingen. /

By boat : 1 marina on the north side of the island. Passenger ferries from Allensbach.
2 landing stages on the south side of the island. In summer there are regular connections to Konstanz, Stein am Rhein, Schaffhausen and Radolfzell.
By bike : The causeway on the island is nearly 3km long and has a dedicated paved path for cyclists, skaters and pedestrians.

Activities : Guided tour. you can walk around the monastery, looking at the Church of St. George of the 10th century./  There are few hotels on Reichenau Island, but there are also campgrounds and fairly cheap hotels, and holidays on the island are suitable for those who like to spend their holidays in peace and quiet.