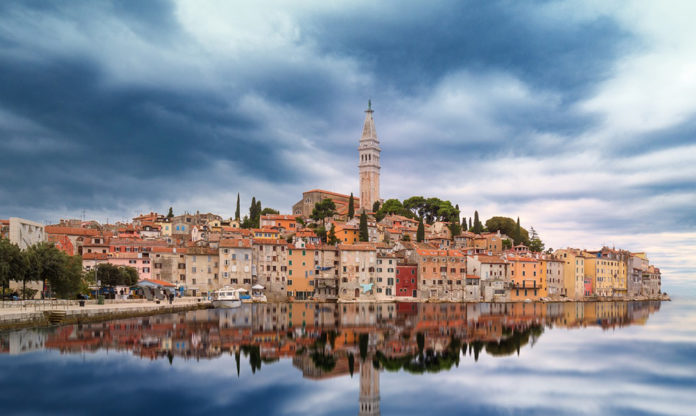 Rovinj-Rovigno  is a city in Croatia situated on the north Adriatic Sea with a population of 14,294 (2011). Located on the western coast of the Istrian peninsula, it is a popular tourist resort and an active fishing port. Istriot, a Romance language once widely spoken in this part of Istria, is still spoken by some of the residents. The town is officially bilingual, Italian and Croatian, hence both town names are official and equal.

History :  Rovinj-Rovigno was already a settlement of Venetian  tribes before being captured by the Romans, who called it Arupinium or Mons Rubineus, and later Ruginium and Ruvinium. Built on an island close to the coast, it became connected to the mainland much later, in 1763, by filling in the channel. Rovigno was eventually incorporated into the Byzantine Empire, later becoming part of the Exarchate of Ravenna in the 6th century, before being taken over by the Frankish Empire in 788. For the following several centuries it was ruled by a succession of feudal lords, and in 1209 it was acquired by the Patriarchate of Aquileia under Wolfger von Erla.

From 1283 to 1797 Rovigno was one of the most important towns in Istria governed by the Republic of Venice. During this period three town gates were constructed and Rovinj was fortified by two rows of defensive walls, remains of which can still be seen today. Nearby the Rovinj/Rovigno pier one can find one of the old town gates, the Balbi’s Arch, dating from 1680, and a late-Renaissance clock tower. The first city statute was proclaimed in 1531. Following the fall of Venice in 1797 and the ensuing Napoleonic interlude, Rovigno became part of the Austrian Empire, which lasted until World War I. According to the last Austrian census in 1911, 97.8% of the population was Italian-speaking. It then belonged to Kingdom of Italy from 1918 to 1947, when it was ceded to SFR Yugoslavia, as part of SR Croatia. The original town name Rovigno was then changed into Rovinj. During the post-war period many Italian inhabitants left Rovinj/Rovigno, which led to significant changes to Rovinj/Rovigno’s demographic structure. Following Croatia’s independence in 1991, the town became one of the most important centers of Istria County, an administrative unit encompassing most of Istria. Rovinj/Rovigno is today the third most populous town in the county, behind Pula/Pola and Porec/Parenzo.

Access : Coordinates: 45.083333, 13.633333 / By plane :
Rovinj is served by Pula airport approximately 30 km south. The easiest way to reach Rovinj from the airport is to drive – the journey takes approximately 40 minutes. Although cars are not permitted in the old town, Rovinj is sufficiently small so that parking is available close to most of the city. Prices are around 2 kn per hour (the park-o-meters accept only coins). There are also buses from Central Pula. By boat : Venezia Lines is a high speed ferry company in the North Adriatic, linking Venice to the Istrian coast and in particular Rovinj. Departure (in season) every day at 17:00 and arrival at 20:00.

Get around :  The old town and the surrounding area are small, and are easily accessible on foot. Bicycle hire is quite inexpensive in Rovinj and there are very good cycle tracks up and down the coast.

Attractions : The old town is best explored on foot. Worth seeing are the original entrance into the city, the Balbi Arch  the market at Valdibora  the cathedral of Sv. Euphemia  the artists’ street of Grisia, described as “Rovinj’s Montmartre”; and the harbour in the centre of the town. There are also taxi boats and excursions to St Katherine’s Island, in the harbour.

Activities : Walk around in the old town.
Climb the campanile of the cathedral of Sv Euphemia in the middle of the old town.
Shop for truffles, olive oil, seafood or fruit and vegetables in the open air market, between 07:00 and 16:00.
Cycle there are miles of cycle tracks to the south through pine forest that follow the coast line. Cycle Hire is relatively cheap for good quality bikes.
Swim right there, below the church you can clamber over the rocks and take a dive in the Adriatic.
Rovinj Heritage Museum, Trg marsala Tita 11/52210 Rovinj,  +385 52 816 720. 09:00-15:00, 19:00-22:00 (late opening, summer only). The museum is housed in a Baroque palace that in the 17th and 18th century belonged to the Califfi counts. It was founded in 1954 by a group of artists from Rovinj with the intention of collecting and exhibiting works of art. Today it serves as a town gallery and as a place where its rich bank of works of art is permanently exhibited. 15 kn.
Rock climbing
There is a big climbing area just half an hour by foot from the city centre (follow signs to the Park Hotel, then 10 minutes further down the road). There are several other climbing areas in the region, but you need a car to get there: Limski Canal ,  Dvigrad