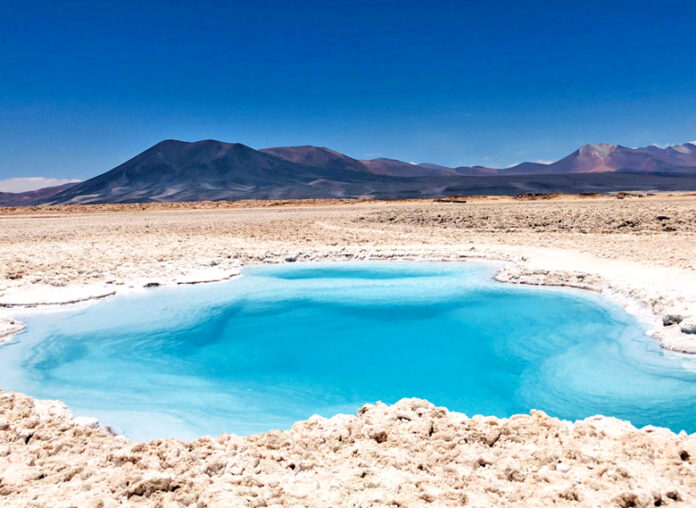 Salar de Pedernales is a salt plain in Chile.  It is located in the Región de Atacama region, in the north of the country, 800 km north of the capital Santiago de Chile.

Salar de Pedernales Nestled in the middle of the Domeyko and Claudio Gay mountain ranges, 3,346 meters above sea level and about 237 km from the city of Copiapó. It corresponds to a vast extension of salt flats located in a depression between mountains, forming lagoons with turquoise blue waters on its interior margins.
In the center of the flat salt plain, there are several small lakes – the habitat of several species of flamingos.
The Salar de Pedernales salt marsh is one of the TOP 10 most amazing places to visit in Chile to get an idea of the natural attractions of the most diverse country in “landscape design” South America.

Access : Coordinates: -26.233, -69.121 / The Salar de Pedernales is located in the middle of the Domeyko and Claudio Gay mountain ranges, at 3,300 meters above sea level. It is located in the Diego de Almagro commune, about 237 kilometers from the city of Copiapó.

Activities : excursions, photography, observation of flora and fauna and adventure tourism can be carried out. / Chile tours.

Go next : The Maricunga salt flat / the Atacama Desert /  the ruins of the mining town of Puquios / Tokonao Village and Salar de Atacama Salt Flats in Chaha Laguna / The Copiapó Volcano.