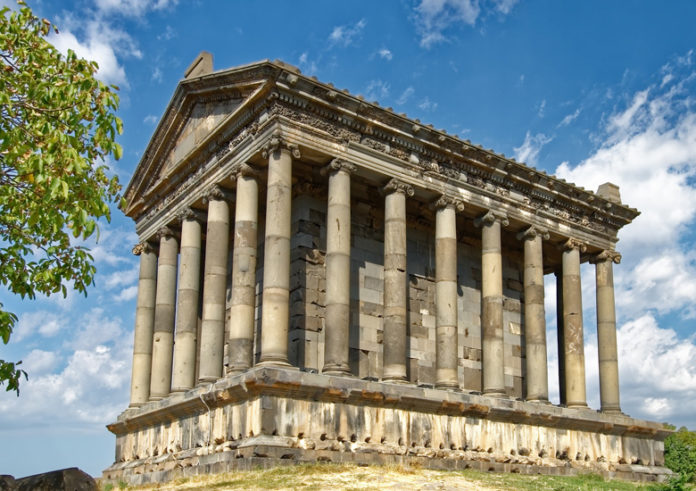 Garni is a temple complex in the province of Kotayk in Armenia, located about 32 km southeast of Yerevan near the town of Garni and above Garni Gorge..it is the only remaining Hellenistic colonnaded temple. It is the best preserved structure of pre-Christian Armenia, one of the most important tourist attractions of Armenia and its only classical temple and the States of the Caucasus.

It was probably built by King Tiridates I in the 1st century AD. C. as temple of the solar god Mihr. After the conversion of Armenia to Christianity in the fourth century, it became the summer residence of Josrovidujt, the sister of Tiridates III. Its possible use as a tomb made it survive when other pagan structures were destroyed. An earthquake collapsed in 1679. It was excavated in the nineteenth century and rebuilt between 1969 and 1975.

Location :  It is on the edge of a triangular cliff that passes through the top of the Azat River ravine and the Geghama mountains, forming part of the Garni fortress, one of the oldest forts in Armenia.

Access : Coordinates: 40.112421, 44.730277 / Location : Geghard Monastery Road H3, Garni, Armenia / Garni is a village in the Kotayk Province of Central Armenia. Taxis are the fastest way to and from Garni. They can be taken in Yerevan and will cost on average 2000-2500 AMD to get there depending on the driver.
/ By bus buses 22, 26 or 36 or marchroutkas 9, 69 or 73 : The marchroutkas and the transport buses for the villages , are the most affordable way to get to Garni , Minibuses and buses leave Yerevan (from the outskirts of Massiv) every 30 minutes, or as soon as they reach their full capacity. Stops are made in the villages of Garni and Goght./ By tourist bus :  Various tour by tourist bus can be arranged in advance in Yerevan.