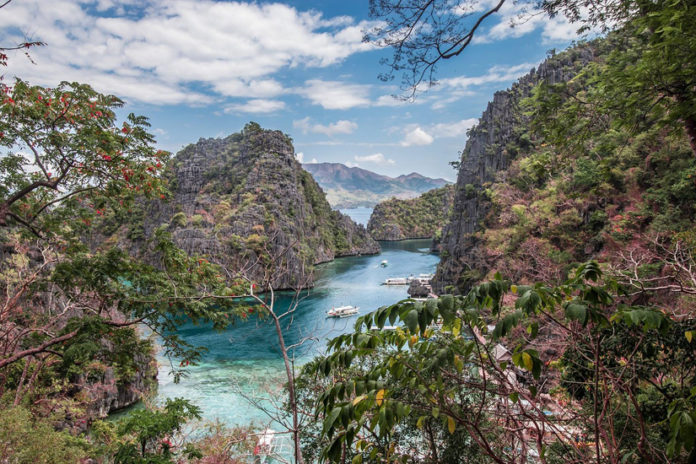 Coron is the third-largest island in the Calamian Islands in northern Palawan in the Philippines. The island is part of the larger municipality of the same name. It is about 170 nautical miles (310 km) southwest of Manila and is known for several Japanese shipwrecks of World War II vintage. Because of its unique ecological features, the entire area is protected by several legal proclamations.

The island and surrounding fishing grounds are part of the ancestral domain of the indigenous Tagbanwa people, officially designated such on June 5, 1998. Known as Calis among the Tagbanwas and Coronians, its tribal chieftain is Rodolfo Aguilar I. The island comprises two barangays of the municipality of Coron: Banuang Daan and Cabugao

Geography : Partially between Busuanga and Culion islands, Coron Island faces the Sulu Sea and forms the eastern side of Coron Bay. It is about 20 kilometres (12 mi) long from north to south, and 9 kilometres (5.6 mi) at its widest point. It is a wedge-shaped mountainous island, dominated by steep cliffs and Karst rock formations made of Permian limestone of Jurassic origin that comprises about 70% of its area. Another 25% is rolling hills, while only 5% is relatively flat. There are 11 lakes nestled in the rugged terrain, of which 3 have underground connections to the sea. There are a few mangroves in coastal areas

Diving : The area around the wrecks has rock formations which provide for snorkeling opportunities, with underwater visibility extending up to 80 feet (24 m). The water is often calm. Coron is one of the most visited destinations for wreck diving in the Philippines. Wreck dive sites are found in depths as shallow as 10–30 feet (3.0–9.1 m) and as deep as 120–140 feet (37–43 m). Most are in the range of about 60–80 feet (18–24 m). Dive sites around Coron include many different reef dive sites and “Gunter/s Cave”, also known as Cathedral Cave because during a certain time of the day, the sun throws a beam of light through a hole in the cave ceiling, illuminating the inside. It is possible to surface in the cave, as the hole in the cave-ceiling allows fresh air to enter. The cave is named after Gunther Bernert, who was part of the first dive group to explore the cave, after hearing from local fishermen about its existence.

Access : Coordinates : 11.929167, 120.241667 / By plane :  Fly into Busuanga from Manila with Airphil Express, Cebu Pacific or Zest Air. Cebu Pacific have three flights weekly from Cebu, on Tuesday, Thursday and Saturday / By boat :  Travel 2go offers bunk bed ferry from Puerta Princess and from Manila to Coron. Ferry is bigger than a banca, similar to cruise ship facilities but really local. There is a boat to Coron that runs from San Jose, Mindoro several times a week. The boat leaves at 09.00; make reservations beforehand, as the boat is often full. Ask at your hotel, or, alternatively there is supposed to be a booking office in San Jose, close to the market.
There are four daily trips to Coron from El Nido by a fast boat (3.5 hours) and slow boat (8 hours) leaving at 6am and 8am, respectively. The fast boat cost is approx 1760 pesos with the slow boat costing 1250 pesos.