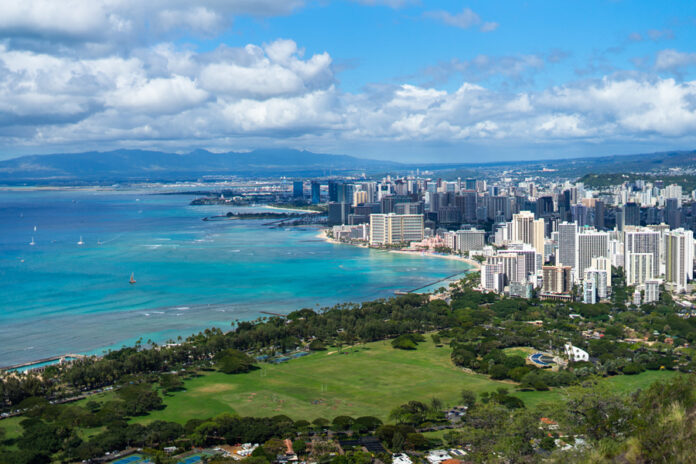 Waikīkī  is a district of Honolulu, in the south of Oʻahu,  in the U.S. state of Hawaii.. and has one of the most famous beaches in the world.

Waikīkī was originally a retreat for members of the Hawaiian Royal Family in the 19th century who learned to surf there. The first smaller hotels were built around 1880. Waikīkī has developed into a tourist hotspot in Hawaii with several renowned hotels.
In the center of the Waikiki district, three streets, Kalakaua Boulevard, Kuhio Boulevard, and Alawai Boulevard, cross, and Lewers Avenue, Liliuokalani Avenue, and Kapahulu Avenue cross.
Waikiki is much more than just a beach. Due to the huge number of tourists, Waikiki is one of the most densely populated areas on Earth. There are 175 high-rise hotels, hundreds of bars and restaurants, parks, fast foods, dance clubs, a huge number of shops, a nightlife center along the 3 km of the beach area.
Currently, as the largest resort area and downtown area in Honolulu, many resort hotels, condominiums, shopping centers and restaurants are lined up around the main streets of Karakaua and Kuhio. Many tourists come from all over the world regardless of the season.

Access : Coordinates: 21.2752, -157.8312 / Honolulu International Airport  is located on the southern coast of Oahu, west of Waikiki. TheBus city buses  # 19 and # 20 run from Honolulu Airport to Waikiki every half hour, passing through the city center./ The green bus route, approximately 35 minutes long from the start and end stops, runs from Diamond Head to Kahala Mall.
/ It takes about 5-10 minutes by car to the Ala Moana area, about 15 minutes to downtown Honolulu, about 20 minutes to the Kahala area, and about 30 minutes to Honolulu International Airport.

Activities : Surfing. At any time of the year / Submarine . Underwater tours on the coast of Waikiki, /  The historical and cultural sights of the city can be explored by the red bus, a route of approximately 40 minutes covering the city center and Chinatown.