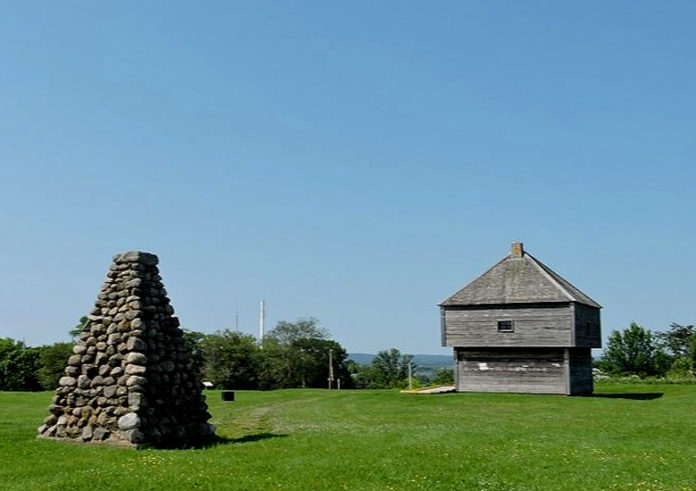 Windsor is a town located in Hants County, Nova Scotia, Canada. It is a service centre for the western part of the county and is situated on Highway 101. The town has a history dating back to its use by the Mi’kmaq Nation for several millennia prior to European discovery. When the Acadians lived in the area, the town was raided by New England forces in 1704. The area was central to both Father Le Loutre’s War and the Expulsion of the Acadians during the Bay of Fundy Campaign in 1755. The town promotes itself as the birthplace of ice hockey and was the home of Canada’s first internationally best-selling author, Thomas Chandler Haliburton. History :  Windsor was settled in 1685 by the Acadian French, who built a network of dikes along the rivers. Windsor has always been a meeting place, first for the Mi’kmaqs, then the Acadians, and later the English gentry.

Windsor became a permanent English settlement in 1749. Its strategic location prompted the British to build Fort Edward. The Blockhouse is the only structure remaining from the original Fort and it is the oldest structure of its kind in North America. Fort Edward is a National Historic Site.

Windsor quickly became a favourite locale of the British gentry, particularly with those living in Halifax. The area’s growth and prosperity was heavily affected by this influential collection of politicians, merchants and military officers from Halifax. In fact, Windsor was such a popular “get-a-way” for people in the provincial capital that it became known as “The Athens of Nova Scotia”.

Shortly after the arrival of the United Empire Loyalists from New England in 1783, Kings College was established in Windsor, in 1788. Kings College was the first independent school in Canada, and today is a world-renowned co-educational preparatory school.

Windsor was for many years a bustling seaport and shipbuilding centre. Between 1840 and 1890, shipbuilding was the most prominent factor in the economy of Windsor.

Windsor is recognized as the “birthplace” of hockey and represents an inextricable part of Windsor’s heritage and culture. In his book Attache, Windsor’s own Thomas Chandler Haliburton, generally regarded as the father of North American humor, alluded to a form of hockey being played by the students of King’s College, now King’s-Edgehill School.

The passage from the Haliburton book, which deals in part with memories of his days at King’s in the early 1800s, is believed to be the earliest written reference to the game we now know as hockey, and goes as follows:

“the boys let out racin’, yelpin’, hollerin’ and whoopin’ like mad with pleasure… with games at base in the fields, or hurley on the long pond on the ice…”

The students from King’s-Edgehill School today still play hockey at the Cradle of Hockey on the Dill Family Farm. There have been many re-enactments of games of hurley-on-ice, “back of the college woods” on the pond. The students at King’s still use the same path today that their predecessors would have used some 200 years ago. It’s also known that the British troops stationed at Windsor’s Fort Edward in the early 1800s took up the game of hurley-on-ice, which evolved into the great Canadian game of hockey. In fact, it’s said that a Colonel John Hockey actually served at Fort Edward.

Access : Coordinates: 44.980278, -64.129167 / The closest airport to Windsor is Halifax International Airport in Halifax. Windsor is approximately 45 minutes by car from Halifax. To get to Windsor from Halifax, take Highway 101 West and get off at exit 5A or exit 6. (The Visitor Center is located at exit 6.) Windsor can also be accessed via Highway 1, also known as the Evangeline Trail, which goes right through the center of town.

Get around :  Public transit is readily available in the town of Windsor. The bus connects to many surrounding communities as well as attractions further down the Annapolis Valley.

Activities : Golf at Rosevale Par Three Family Golf Course- located just minutes from Windsor, just off the Chester Rd. Great golfing for learners, kids, and anyone looking to have fun and enjoy their day off!

Go next : Continue along the Evangeline Trail (Hwy 1) to Grand Pre and Wolfville. Further along are Annapolis Royal (Port Royal) and Digby.
In winter, take Highway 14 to Ski Martock for cross country and downhill skiing/snowboarding.