Yanar Dağ ( burning mountain ) is a natural gas fire that has been burning on the slope of a hill in Azerbaijan since ancient times.

Although the cause of the origin of the fire is unknown, its geological source is in a large underground reservoir of gas that seeps cleanly through the porous rock. Here a bonfire burns almost eternally along about 200 meters, with flames up to 3 meters high.
Fires of natural origin have been burning there since ancient times, which historical writers such as Marco Polo have reported on.

The proximity of the site to Baku and its spectacular nature, especially at night, have made Yanar Dag become a tourist attraction and pilgrimage destination for the Azerbaijani population, as well as foreigners from India, in recent years. and Iran.

Go next : mud volcanoes of Lokbatan or Gobustan / Ateshgah – Fire Temple / Sumgait , the second-largest city in Azerbaijan, located near the Caspian Sea / Xırdalan ,the capital of Absheron Rayon in Azerbaijan. 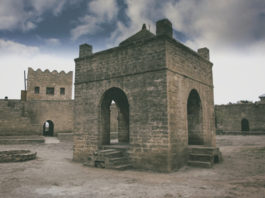