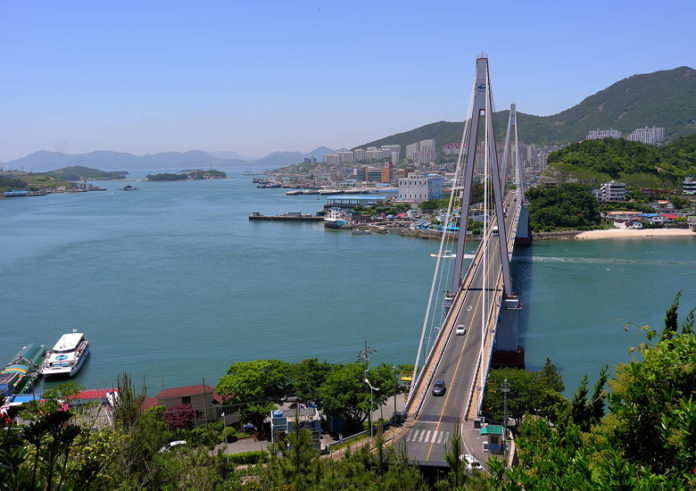 Yeosu is a city in Jeollanam-do, South Korea, whose territory is spread over a peninsula and 317 smaller and larger islands. Together with the Suncheon and Gwangyang cities of Jeollanam-do and the Hadong district of Gyeongsangnam-do, Yeosu is part of the Gwangyang Bay Free Economic Zone. Yeosu hosted the World Expo 2012. Yeosu is one of the country’s most picturesque port cities especially at night. Famous for its seafood, beaches, flowers and marinas, it is developing as an international ocean resort and tourist destination, The city of Yeosu consists of the Yeosu peninsula as well as 317 islands (49 inhabited, 268 uninhabited) with population of 300,000. Yeosu is a city of history and loyalty where the headquarters of South Jeolla Province Navy Base was located, and the Great Admiral Yi Sun Shin invented the Geobukseon or “a turtle ship” to save the country while serving as the Navy Commander when Japan invaded Korea in 16th century.

Lying about midway along the southern coast of South Korea, Yeosu has cool summers and mild winters thanks to the sea wind and warm current. Its blessed ocean climate also brings Yeosu relatively longer springs and autumns than other regions.

Access : Coordinates: 34.733333, 127.733333 / By train :  Yeosu has two train stations. The main station is called Yeosu Station yeosuyeok which is the southernmost station of Honam line and one stop before that there is smaller Yeocheon Station yeocheonyeok . Check Korail website for schedule, to check fare or to book tickets .

The high-speed train KTX began service to Yeosu October 1, 2011. A trip from Seoul to Yeosu takes about three hours 20 minutes.
By bus :
The express bus terminal is connected to most bus routes across Korea. From Yeosu, it takes 5 hours 30 minutes to Seoul (Central City terminal) and 2 hours to Gwangju, former capital of South Jeolla. There are 2 main terminals- one in the middle of the city and one in the Yeocheon neighborhood on the west end of the city. There is a minor terminal in Deogyang neighborhood in the north.
By plane :
Korean Air  and Asiana Air  fly between Yeosu Airport (,IATA : RSU, ICAO : RKJY)and Gimpo Airport(Seoul) up to 8 times a day and it takes 1 hour. Korean Air also has flight between Yeosu and Jeju on Friday and Sunday. The airport has information desk, convenience store, restaurant, snack bar and rent car office. There are buses to various parts of the city but taxi is cheap and more convenient. It can take up to 1 hour to the downtown(shinae) of Yeosu by car.

Get around :
The best way around the CBD is by taxi as the city is fairly small and taxi fare is quite cheap. Taxis are highly recommended against if crossing the bridge as Yeosu has some of the worst traffic jams in Korea at this bottleneck, despite its tiny size. Even by bus, it could be optimal to get off, walk the bridge and hop back on the previous bus at the other end. * Note as of July 2013 this was not an issue for this traveller, in Yeosu for the last two weeks — a second bridge was built last year for Expo 2012 and the traffic jams seem to have gone away.

By bus
The bus system is very convenient, but a little difficult to utilize. Each bus stop should have a posting of the buses that will arrive and their respective stops but most have been inexplicably vandalised. Those that do still exist are strictly in Korean.

Once south of the main bridge, most buses actually take a similar route so it can be easy to hop on and off in whichever direction to wish to head. The one exception to this is a branch where half the buses turn south-east to stop at the hermitage whereas the rest continue south around the island chain.

The “magic number” bus, if you can call it that, is the 111. This bus travels a zig-zagging route from the Intercity bus Terminal to Hyangiram Hermitage via Jinnamgwan and the harbour, crossing the Dolsan Bridge and passing many of the tourism attractions on the southern islands.

Attractions : Maritime Fisheries and Science Museum Located on the thinnest part of Dolsan island, beside the main road.
West market
Yeosu Fish Market Large market with live sea creatures of many kinds (fishes, octopuses, sea cucumbers etc.) on display to be sold.
Odong island ,  Small island with interesting flora and beautiful sea views. A lighthouse with free observation deck. Don’t miss the Dragon Cave. Perfect for a morning walk or run. The island is connected by a 750-m-long bridge/pier to the mainland. About 15-20 min walk from the Expo site.
Jasan Park  View of Yeosu. Statue of Yi Sun Shin.
Manseongri Black Sand Beach : Manseongri is the liveliest beach in Yeosu with lots of restaurants and cafes along the beach. Along the coast line between Manseongri and Yeosu train station is located Marae Tunnel, the only natural rock tunnel in Korea. The beach is situated about 2 km north of the Yeosu-Expo train station. While possible, it’s not a great beach for swimming. There are more rocks (although round) than sand and many small fishing boats anchored in the bay. The water was very clear though (at least in June 2015).
Soho-dong – has yacht marina, various restaurants and cozy cafes along the coast.
Hanwha Aqua Planet (Yeosu Aquarium), (at the Expo site), . 10am-7pm. Very nice aquarium, well worth a visit. The highlight is the feeding show in the main tank in which giant sting rays are hand-fed.

Hyangiram Hermitage . A beautiful temple-like hermitage with views of the sea and the scattered islands that make up Yeosu Peninsula. The hermitage itself is located up the sides of a cliff and the entire complex is connected by a series of very thin trails winding their way through tight caves and under twisted evergreen foliage. Rather claustrophobic, but unique making it one of Yeosu’s must-see attractions. The symbol of the hermitage is the turtle, after the distinctive natural hexagonal pattern on the rocks resembling a turtle’s shell. In accordance with this, the monks have crafted a veritable army of adorable little stone turtles large enough to perhaps take down Yeosu itself, should they so desire. Lies in a corner of the islands designated as a national park.
World Expo 2012 site Most of the buildings that were used for the 2012 World Expo are still (as of summer 2015) in place to be seen. The impressive Big O show can still be enjoyed.
Replica turtle ship A full-sized replica of one of Admiral Yi’s famed turtle ships. You can have a wander around the inside which is stuffed to the brim with some decidedly seasick looking mannequins acting out their daily routine. Situated just south of Dolsan bridge.
Jinnamgwan  Korea’s largest single-storey wooden pavillion. Has a small museum attached. About 100m up the hill from the plaza beside the harbour. Free
Dolsan bridge  is a beautiful bridge with changing lights at night and lots of seafood restaurants and romantic cafes around the area. Good place to see Yeosu’s famed nightview. For even more striking nightview, climb up to Dolsan Park  when you cross the bridge.

Gyeongho island accessed by car ferry (2000 won return) from yeosu fishing port opposite lotte mart offers a full golf course and hotel resort including swimming pool, with many beautiful views of the bay.
Yeosu Maritime Cable Car, (Between Dolsan Park and The Expo site (on the hill above the MVL hotel). This new (opened in 2014) maritime cable car is gives great views as you hang above the sea crossing to or from the Dolsan island. An elevator from the street level close to the large MVL hotel (just south of the Expo site) was under construction in the summer of 2015.
Ocean Rail Bike, (Just south of the Black Sand beach, which in turn is about two km north of the Yeosu-Expo station along the coast). This rail bike gives great see views and an unusual work-out experience. After going downhill along the coast for about a km you get to a tunnel with some light shows whereupon your bike is turned and you go uphill back to the start (this is the workout part).
cean Cruise: either leaving from Odongdo  or across Dolsan Bridge, there are dozens of different cruises hopping different islands in Hallyeo Ocean Park.
Mount Gubong  located in yeoseodong
Paraocean Waterpark – located in the latest and biggest resort in Yeosu, The Ocean Resort, the waterpark has dozens of indoor and outdoor pools and slides as well spa, restaurants and shops