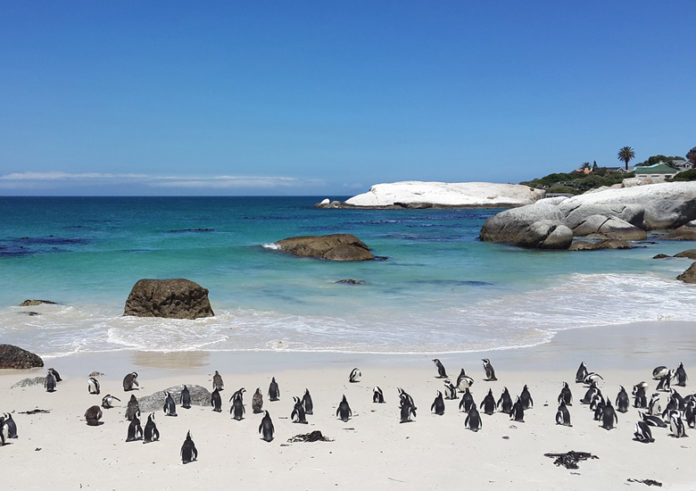 Boulders is a popular beach near Simon’s Town, Cape Town in the Western Cape province of South Africa.

There are larger and more scenic beaches around, as Boulders, which gets its name from the large boulders surrounding it, is fairly small, although it is often sheltered from the prevailing winds. From the beach one has views over False Bay. It is world famous for its colony of African penguins (formerly known as Jackass penguins).

Access : Coordinates: -34.197, 18.451 / There is a R76 entrance fee for adults to enter the park, which gives access to the penguin viewing spots and the beach. By car :  Driving by car, Boulders is a popular stop on the way back from (or to) Cape Point if you have limited time. It’s possible to do a circular route, driving past Boulders on the east coast, and along the west coast of the peninsula in the reverse direction.

The easiest route is to drive south on the M3 (De Waal Drive) from Cape Town. At the end of the highway, turn left, and about 500 m on, turn right onto the M4 (Main Road) along the east coast of the Cape Peninsula. After passing through Simon’s Town turn left down Bellevue Road opposite the Country Club – you will see a brown sign directing you to the parking lot at the end of the road. Be careful, because the road is quite narrow and there is the danger of accidents when going out again. The penguins here have adapted to the constant flow of humans coming to see them, so they certainly won’t make way.

A more scenic alternative is to take the M3 south from Cape Town. At the end of the highway, turn right, and about 800 m on (through one traffic light), turn left onto Ou Kaapse Weg. Cross the scenic mountain pass (you can stop for a view at the top, turning off at the Silvermine sign). On the other side, continue straight, through two traffic lights. You’ll cross Black Hill, a smaller mountain pass, with views of the Indian Ocean. You descend and reach the coast road. Turn right, and continue to Simonstown, as above.

By train :  Take a MetroRail suburban train from Cape Town to Simon’s Town. The station at Simon’s Town is about 3 km from Boulders Beach; you can walk there by following the Main Road (M4) southwards until you get to Bellevue Road or take a Riki’s taxi from the station.

You can see the penguins without having to pay any fees, but the penguins’ private beach is managed by Table Mountain National Parks and an entry fee R30 (as of Dec 2008) per person is charged. Entry for those with Wild Cards is free. See Wild In Africa for more information about the Wild Cards for local and international tourists.

Once you have parked your car at the parking lot, pay the entry fee, and go either to Boulders Beach to enjoy a relaxed time, swimming together with penguins or walk further on and you will get to a spotting place, where you will be able to see most of the penguins from a small distance.

Going to the beach is an adventure especially in summer, when it is warm and when you will share most of your time with penguins in the water. You can also climb around to get to a less crowded part of the beach. Do not try to catch or touch the penguins. They are already distracted from their natural way of life by tourists and they can easily bite off a finger! Going to the beach means getting up early, because only a limited number of people are allowed onto the beach and it can be full by 10-11AM.

Activities : Play a game of golf at the minigolf course next to parking lot. The sandy beach is one of the few that is often sheltered from the strong winds that batter the Peninsula, and the water is warm and calm for swimming with the penguins.

Go next : Visit the sights of the Cape Peninsula, Cape Town and the Cape Winelands. Go to Simon’s Town, onto Fish Hoek or Chapman’s Peak  / Muizenberg Beach