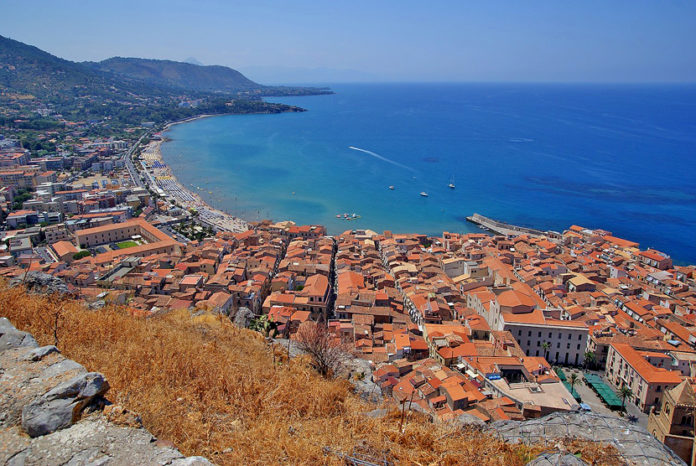 Cefalu  is a city and comune in the Province of Palermo, located on the northern coast of Sicily, Italy.

on the Tyrrhenian Sea about 70 kilometres (43 mi) east of the provincial capital and 185 kilometres (115 mi) west of Messina. The town, with its population of just under 14,000, is one of the major tourist attractions in the region. Despite its size, every year it attracts millions of tourists from all parts of Sicily and also, from all over Italy and Europe

History :  Of Greek foundation, the city evidently derived its name from its situation on a lofty and precipitous rock, forming a bold headland (Κεφαλή) projecting into the sea. Despite the Greek origin of its name, no mention of it is found in the works of Thucydides, who expressly says that Himera was the only Greek colony on this coast of the island  it is probable that Cephaloedium was at this time merely a fortress (φρούριον) belonging to the Himeraeans, and may very likely have been first peopled by refugees after the destruction of Himera. Its name first appears in history at the time of the Carthaginian expedition under Himilco, 396 BC, when that general concluded a treaty with the Himeraeans and the inhabitants of Cephaloedium.

But after the defeat of the Carthaginian armament, Dionysius the Elder made himself master of Cephaloedium, which was betrayed into his hands. (Ibid. 78.) At a later period we find it again independent, but apparently on friendly terms with the Carthaginians, on which account it was attacked and taken by Agathocles, 307 BC.  In the First Punic War it was reduced by the Roman fleet under Atilius Calatinus and Scipio Nasica, 254 BC, but by treachery and not by force of arms. Cicero speaks of it as apparently a flourishing town, enjoying full municipal privileges; it was, in his time, one of the civitates decumanae which paid the tithes of their corn in kind to the Roman state, and suffered severely from the oppressions and exactions of Verres.

It also minted coins. No subsequent mention of it is found in history, but it is noticed by the geographers Strabo, Pliny, and Ptolemy, among the towns of Sicily, and at a later period its name is still found in the Itineraries.

After the fall of the Western Roman Empire the town passed to the Eastern Roman (Byzantine) empire, and the settlement was moved from the plain to the current spur, although the old town was never entirely abandoned. In 858 AD, after a long siege, it was conquered by the Arabs, and rechristened Gafludi. For the following two centuries it was part of the Emirate of Sicily. In 1063 the Normans captured it and in 1131, Roger II, king of Sicily, transferred it from its almost inaccessible position to one at the foot of the rock, where there was a small but excellent harbor, and began construction of the present Byzantine-style cathedral.

The area was still inhabited by Byzantine Greek speakers in addition to Arabs, and these Christians were then still members of the Eastern Byzantine Church. Between the 13th century and 1451 it was under different feudal families, and then it became a possession of the Bishops of Cefalu. During the Risorgimento, the patriot Salvatore Spinuzza was shot here in 1857. Cefalu became part of the Kingdom of Italy in 1861.

Access : Coordinates: 38.033333, 14.016667 / By train :  Frequent trains run to and from Palermo, Milazzo and Messina. From Messina, many continue on to Naples and Rome. The train from Palermo costs €5.60 and takes one hour running right along the coast. By bus :  Several buses a day run to Castelbuono and Palermo from outside Cefalu’s train station. As with the train, the journey from Palermo is about 1 hour. By boat :  During the summer, a few hydrofoils run to Palermo and the Aeolian Islands.

Activities : Walk 15 minutes East around the headland to the bustling tourist port, full of fishing boats and islets , Climb The Rock (La Rocca) for great views of the red-roofed town and beautiful bay area as well as a visit to Diana’s Temple (Tempio di Diana) , Visit the harbour – Piazza Marina , Relax on the beach – one of the best in Sicily. Keep in mind that the beach is divided into different sections, some with umbrellas and beach chairs set up that you can rent. The price, from about €8 to 15, decreases the further you walk along the beach.

Cavoli beach in Marina di Campo, on the Island of Elba