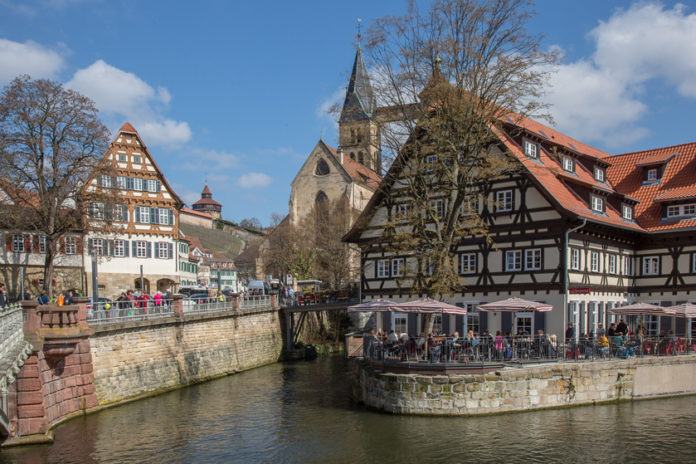 Esslingen am Neckar is a city in the Stuttgart Region of Baden-Wurttemberg in southern Germany, seat of the District of Esslingen as well as the largest city in the district.

It is located on the Neckar River, about 14 kilometres (9 miles) southeast of Stuttgart city centre. The regions surrounding the city of Esslingen are also mostly developed. Esslingen was a free imperial city for several centuries until it was annexed by Wurttemberg in 1802

History : Prehistoric times :  There is archaeological evidence that what is now the city of Esslingen was settled since the Neolithic. Traces of human settlement found at the site of the city church date back to around 1000 B.C. Roman times :  In the 1st century AD the Esslingen region became part of the Roman Empire. During this period a Roman warehouse was located in the area of Oberesslingen. The nearest major Roman settlements and garrisons were at Cannstatt and Kongen

Middle Ages :  Esslingen was first mentioned in 777 as Ezelinga in the last will of Abbot Fulrad from Saint-Denis (near Paris), the chaplain of Pippin and Charlemagne. He bequeathed the church sixth cell upon the river Neckar to his monastery, Saint-Denis. He also brought the bones of Saint Vitalis to Esslingen, which made it a destination for pilgrims and led to its growth. Around 800 Esslingen became a market town, its market rights being certified in 866. In 949–953 it was a possession of Liudolf, Duke of Swabia. Esslingen received city rights in 1229 under Emperor Frederick II. During the same period the still extant Neckar bridge was built, making Esslingen a major centre for trade on the route between Italy, Switzerland, and northern Germany. Taxes provided by the bridge and market led to further growth of the town, as did the export of the highly regarded wines from the region.

The period between the 13th century and 16th century saw many conflicts between the Free Imperial City and the Counts of Wurttemberg (later Duchy of Wurttemberg). About half the population lost their lives in the Thirty Years War between 1618 and 1648 through famine or epidemics. Esslingen lost its independence as an Imperial city in 1802-1803, becoming part of the Duchy of Wurttemberg. 19th century to date :  The beginning of the 19th century was characterised by industrialisation. Glove manufacturing, food processing, textiles, and metal working were early industries in Esslingen. On 20 November 1845 the first train ran from Cannstatt to Esslingen station. Esslingen was occupied by U.S. soldiers in April 1945, towards the end of World War II. During the war the city suffered very little damage, thus the medieval character of its city centre has been mostly preserved.

Access : Coordinates: 48.733333, 9.316667 / By train : Esslingen (Neckar) station. This station sees regional and S-Bahn Stuttgart service / Trolley bus and diesel bus Esslingen, along with Solingen and Eberswalde, is one of the last three German towns which still use trolleybuses. The SVE currently operates two lines using electric power: 101: Oberesslingen Lerchenacker Endstation – Esslingen railway station- – Stuttgart Oberturkheim railway station. 118: Esslingen Railway Station – Zollberg. Apart from this around 50 taxis operate in the town. / Road Transport :  Esslingen is directly on the B10 State Highway which runs as a dual carriageway from Stuttgart to Süssen, and continues onward to Ulm. The exit for Esslingen, just after the B10 passes under the ancient Pliensau Bridge, is particularly unusual, because in the direction of Ulm there are two entry and exit points to the dual carriageway. This makes it is possible to reach the centre of Esslingen directly from Stuttgart, and to drive from central Esslingen directly onto the Dual Carriageway in the direction of Ulm without having to pass traffic lights. Despite the six to eight lanes on the new Pliensau Bridge and the surrounding roads, the infrastructure around Pliensauvorstadt and the route to Zollberg still suffers from frequent congestion. Esslingen is also on the German Timber-Frame Road.