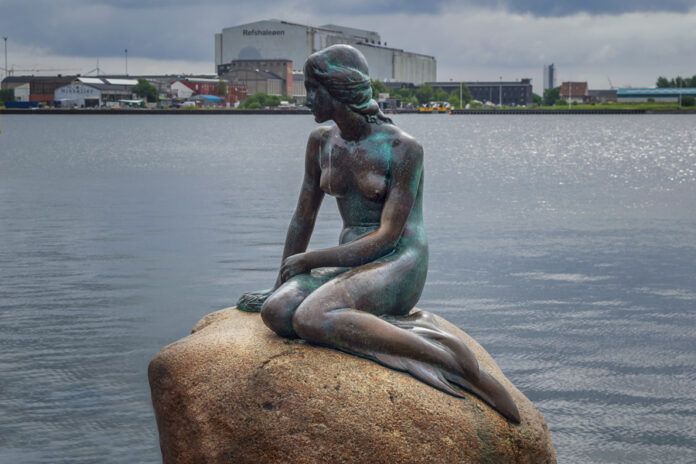 The Little Mermaid  is called a bronze figure on the Langelinie waterfront in Copenhagen, Denmark.

The sculptor Edward Eriksen, as a model, chose the famous Danish ballerina of the Royal Theater of the early twentieth century, who was also the wife of the master.
The monument was created by Danish sculptor Edward Eriksen by order of a large businessman, owner of the Carlsberg brewing concern and philanthropist Carl Jacobsen. The son of the creator of the Carlsberg brewery, impressed by the ballet The Little Mermaid, invited the ballerina who performed the main role to pose for the sculptor Edward Eriksen. Over time, the statue was donated to the city.
For more than 95 years, the landmark of Denmark has been the little mermaid, a cute character of the world famous fairy tale of the same name by the famous Danish storyteller H.-K. Andersen.

Access : Coordinates:55.692861, 12.599278 / Address: Langelinie, 2100 København Ø -Copenhagen, Denmark / By public transport: There is no public transport directly to the sculpture. It takes about 7 minutes to walk from the nearest stop. By bus number 1A to the Esplanaden stop. By bus number 26 – to the Indiakaj stop. By water bus no. 991 or no. 992, get off at Nordre Toldbod , Københavns Havn.
/ By car: From the Central Railway Station to the sculpture about 4 km. Parking a couple of minutes walk.

Go next : Just 400 meters away. The so-called younger Little Mermaid / Stroll along the picturesque Langelinie embankment, admiring liners and yachts in the waters of Øresund and go to the Kastellet fortress.