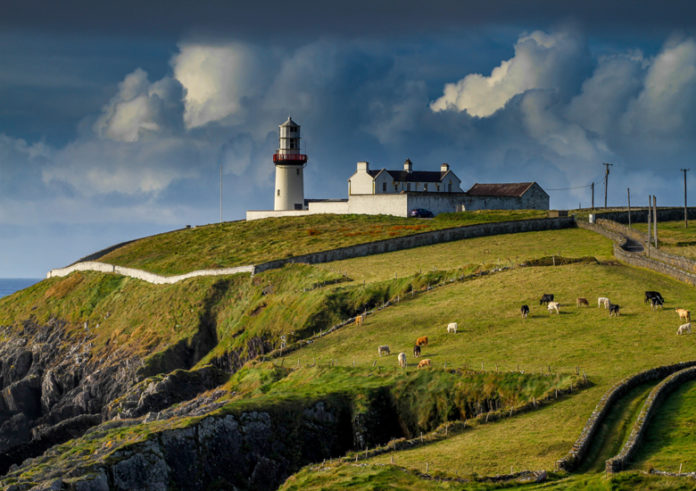 The lighthouse at Galley Head is a 19th century lighthouse near Rosscarbery in Cork County , on the south coast of Ireland.

It is located at the southern end of Galley Head Point known as Dundeady Island overlooking the entrance to the St. George Canal separating Wales from Ireland above Red strand beach and Long Strand. The promontory is cut off from the mainland by the ancient walls of the old Norman fortress of Dun Deidi, an important fortress of the local O’Cowhig clan.

It is operated by the Commissioners of Irish Lights. Although the construction of the buildings was completed in 1875, the lighthouse became operational only in 1878. Its first maritime fire is very characteristic  it is composed of six or seven flashes of white light for sixteen seconds every minute. This is due to the operation of rotating octagonal optics, combined with a light fed by coal gas burners that were turned on and off every two seconds or so. With a range of 30 km in optimal conditions, it was one of the most powerful lighthouses of its time before its neighbor Fastnet lighthouse. Galley Head lighthouse station is close to the award-winning village of Clonakilty, the Galley Head lighthouse along with the Fastnet lighthouse have the distinction of being two of the most powerful lighthouses in Europe.

Special Notes: There are cliffs nearby and children should be supervised at all times.