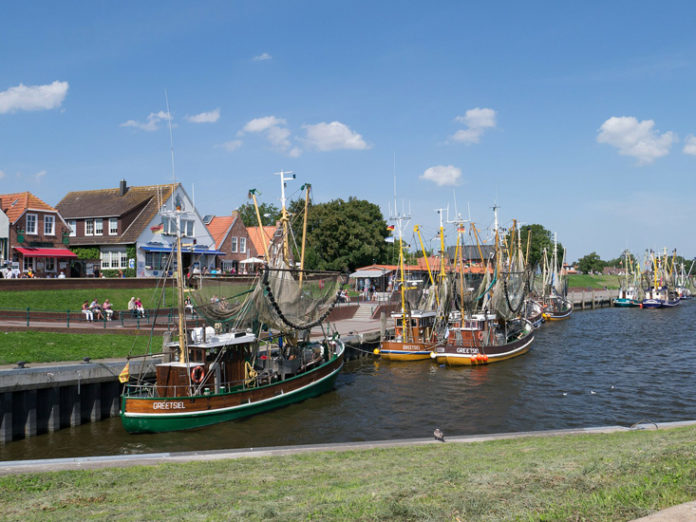 Greetsiel is a small port on the bight of Leybucht in western East Frisia, Germany

that was first documented in letters from the year 1388. Since 1972, Greetsiel has been part of the municipality of Krummhorn, which has its administrative seat in Pewsum. The nearest railway station is at Emden, about 15–20 kilometres (9.3–12.4 mi) away, and the two towns are linked by a bus service. Although originally just a small but picturesque fishing village, Greetsiel has become a major tourist attraction. In December 2006, it had 1,534 inhabitants, but the number of people living in the village significantly increases during the summer months and over the Christmas holidays.

Geography :  Greetsiel is situated on the Leybucht, a small bay on the East Frisian coast. Over time, large parts of the bay were reclaimed behind dykes, so that Greetsiel is the only port in the bay today. In the 1990s, the Leybuchthorn was completed. This structure extends as a spit out into the Wadden Sea. Within the Leybuchthorn is a reservoir and the approach channel from the North Sea into Greetsiel Harbour (Greetsieler Hafen). Between the port and the open sea is a lock. Since the completion of the structure, Greetsiel Harbour has been accessible from the sea, irrespective of the tide. The distance to the nearest towns of Emden and Norden is 15–20 km (9.3–12.4 mi) to the north and south respectively.

History :  Greetsiel is first mentioned in the records in letters dating to the year 1388 (Ocko I tom Brok). At that time, Hamburg’s ships lay at anchor in the port of Greetsiel and had to pay tariffs. The place was founded by the Domain of Appingen under the chiefs of Cirksena. While Appingen increasingly lost its importance, Greetsiel became the seat of the chief. In 1462 Count Edzard the Great was born at the Cirksenaburg; under his rule East Frisia extended from the River Weser as far as Groningen. In 1547 Ubbo Emmius was born here. On old Dutch maps the town is marked as Grietjezijl. In creating the municipality of Krummhorn in 1972, a debate erupted over whether the administrative headquarters should be Pewsum or Greetsiel. Because Greetsiel was a more isolated location, Pewsum was preferred.

Access : Coordinates : 53.498611, 7.098056 / Greetsiel is linked by state roads to Norden and Emden and from there the A 31. At one time the Emden-Pewsum-Greetsiel light railway linked Pewsum and Greetsiel with Emden. The operation of the 1,000 mm (3 ft 3 38 in) metre gauge gauge railway began in 1899 between Emden and Pewsum and, in 1906, the line was extended to Greetsiel. Kleinbahnstra?e in Greetsiel recalls that period, along which there are still several railway buildings that are now used for other purposes. The narrow-gauge railway was closed in 1963  since when passenger services have been taken over by buses. Today, Greetsiel is connected by bus with the former county town of Norden as well as Emden. Greetsiel can also be reached by smaller boats from the direction of Emden. The Alte Greetsieler Sieltief and the Neue Greetsieler Sieltief connect the port with the East Frisian inland waterways network.

Culture and points of interest :

events :  An annual painting and art exhibition, known as Greetsiel Week (Greetsieler Woche), is of national prominence. It has been running for more than 30 years and exhibits a range of works including: art, ceramics, goldsmiths’ products and sculptures. Every two years, the Imke Folkerts Prize for Fine Arts, worth 10,000 euros, is awarded at the event. Qualifying entries include works in the fields of art, graphics, photography and sculpture. There are also regular exhibitions in Greetsiel’s twin windmills. Every year in mid-summer is the boat parade in which the majority of Greetsiel’s cutters take part. The crews take guests on a roughly four-hour boat trip. The port also hosts a supporting programme of events with music and shrimp-shelling competitions.