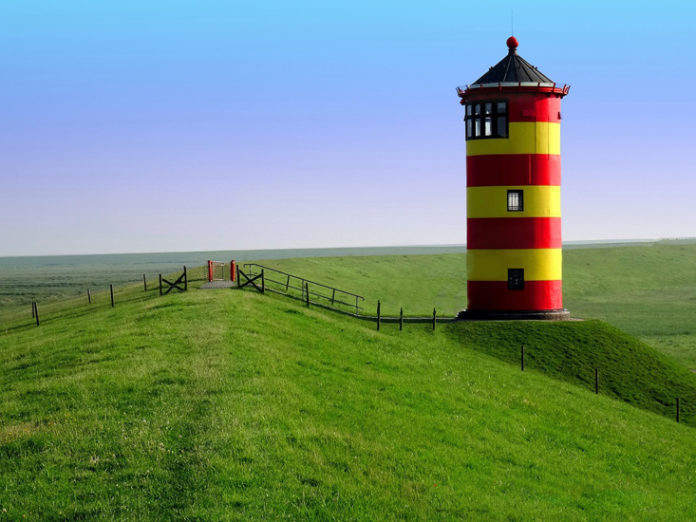 The Pilsum lighthouse is a lighthouse on the North Sea dyke not far from the town of Pilsum, which belongs to the municipality of Krummhörn. The tower is one of the most famous landmarks in East Friesland.on Germany’s North Sea coast.

The Pilsum Lighthouse  was built in 1889 in order to provide a beacon for the Emshorn channel on Germany’s North Sea coast. It is located on a dyke near the village of Pilsum in the municipality of Krummhorn , near greetsiel. It has guided ships through the narrow channel until 1915. In the First World War its light was extinguished in order that enemy ships could not navigate the route.  After that it was no longer needed, because the channel was changed.  The height of the structure is 11 metres  the height of the light about sea level is 15 metres. Today the tower is one of the best-known symbols of East Frisia

Film :  The tower grew in popularity as a result of the film Otto – Der Ausserfriesische (de) (“Otto – the Outer Frisian”) by comedian Otto Waalkes.  In the film Otto lives in the lighthouse. Although the lighthouse is one of the central scenes in Otto – der Auerfriesische, for some reason the picture used on cinema advertisements and later on the inlays of the video and DVD editions was of the Westerheversand Lighthouse, not the Pilsum Lighthouse.

Go next : Pilsum , a village in the East Frisian community of Krummhörn, Lower Saxony.