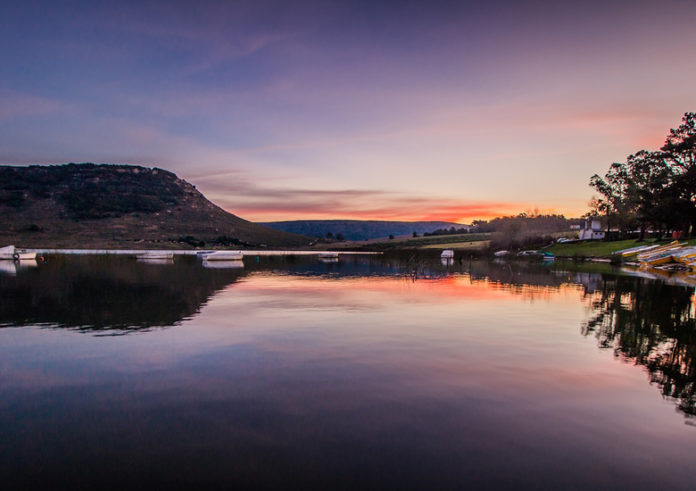 La Brava is a lake in the eastearn part of the Balcarce Partido in Buenos Aires Province, Argentina.

It lies just on the border with General Pueyrredon, 40 kilometres (25 mi) northwest of the city of Mar del Plata and 25 kilometres (16 mi) east of the town of Balcarce. Located within Mount La Brava, the lake area is privately owned, although open to the public for fishing and camping. There are several campsites around the lake, like Ruca Lauquen on the east coast and the Fishing Club Balcarce on the north, both of them with recreational facilities and boat piers.

The lake is described as a rift lake or tectonic lake, probably a natural reservoir formed by dunes. La Brava is the habitat of a number of bird species, like swans, ducks, coots, herons and gulls. Capybaras and otters dwell in its shores. The lake also support a fish community dominated by the silverside and the dentudo. The landscape has been compared with that of the lakes of western Patagonia

Description: has 500 acres with a maximum depth of 8 meters, low costs rough canyons easily accessible. His background is mud and rough. The Arroyo Tajamar is affluent and emissary.  Access : Coordinates: -37.881139, -57.977306 / Location: 40 kilometers from Mar del Plata and 440 of Capital Federal by Highway 2 and Route 226. / From Buenos Aires to the Brava lagoon, it is 440 kilometers along the highway to La Plata, route 2 to Coronel Vidal and route 55  4 kilometers before reaching Balcarce, turn left on route 226 until kilometer 31 (Villa Laguna La Brava) or kilometer 35.5 (El Dorado place)  four tolls, $ 110.

Activities : kayaking, windsurfing, hiking, mountain biking and horseback riding. , fishing from the shore of the lagoon or on a boat , paragliding , Sunsets at La Brava Lagoon and Mountain Range . / Ships: rent boats.

Remarks: camping and fire only in approved facility.  The winds appear suddenly. Private properties bordering the water. There are camping with store, canteen, boxes with barbecue and spring.