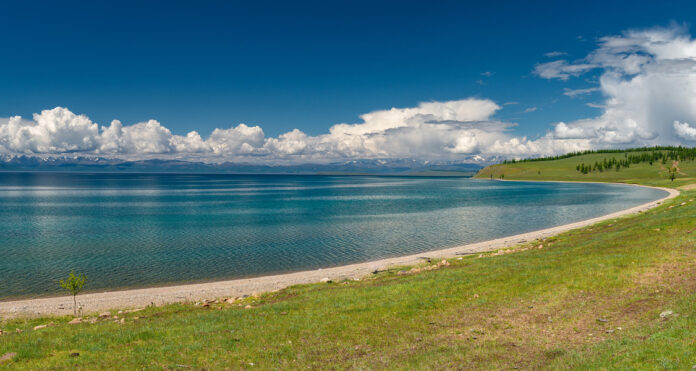 Lake  Khubsugul is a high-mountainous lake located at an altitude of 1645 meters above sea level on the southern slope of the Eastern Sayan Mountains.near the northern border of Mongolia.
Khövsgöl is located in the Baikal rift zone, which explains its resemblance to the largest lake in the world. Similar features can be identified when studying the hydrological regime and mineral composition – in both reservoirs, the water is clean and fresh, suitable for drinking in its raw form.
Lake Khövsgöl is located in the north of Mongolia, on the territory of the Khubsugul National Park, at the foot of the high ridges Bayan-Zu, Khiin-Nuuru and Munku-Sardyk (Eastern Sayan), 11 km from the Russian-Mongolian border crossing of Mondy in Buryatia.

Access : Coordinates: 51.1, 100.5 / Geographically, the reservoir belongs to the Khuvsgel aimak (administrative unit). The nearest settlements are Turt or Khankh, Khatgal. / It is easier  to get to the Blue Pearl from Irkutsk. The distance from this city to the border point at Mondy is 304 kilometers. It can be overcome in 4–5 hours. You will need to move along the A-333 road, the route partially passes through the Tunkinskaya valley. There are not enough gas stations in Mongolia, so experienced travelers are advised to fill a full tank in Kyren, which is 20 km from the border.
/ By train: a less comfortable way. Trains leave from Moscow and Irkutsk and follow to the Mongolian capital. The distance from Ulan Bator to the lake is 777 km. You can overcome it, for example, with a rented car.
/ Cars can be rented at tourist bases in Khankh, or travel by car. It is best to choose SUVs such as UAZ or GAZ-66 for such trips, or light all-terrain vehicles such as Lada Niva.
/ Water transport: you can travel from the northern part of the lake to the southern part by ferry “Sukhbaatar” but it cannot take cars on board..
/ The northern part of the lake is located 11 kilometers from the Russian-Mongolian border, the Mondy-Khankh checkpoint.

Activities : sightseeing / photo opportunities / trekking / Ecotourism / go on a horse tour along the coast or to the Darkhad Basin, shoot Mongolian bows / Fishing on Lake Khuvsgul.

Go next : the nearest village of Khatgal  / Lake Shara-Nur. It is located in the north of Khubsugul near Munku-Sardyk. / The Republic of Buryatia is located in Eastern Siberia.