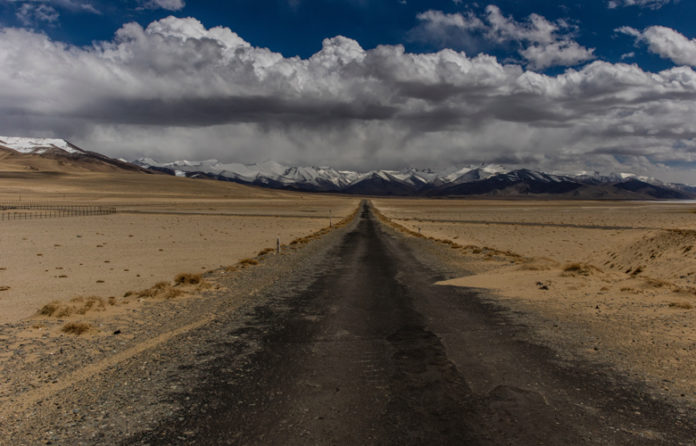 The M41 well known as the Pamir Highway is a Central Asian highway that runs through the Pamir Mountains, passing through Afghanistan, Uzbekistan, Tajikistan and Kyrgyzstan. It is the only road through the East Tajik region Berg-Badachschan and after the Karakorum Highway the second highest paved highway in the world after Karakorum.
It is the only continuous route that crosses the difficult mountainous terrain and serves as the main supply route in Tajikistan to the autonomous region of Gorno-Badakhshan.

The route has been used for thousands of years, since there are very few viable routes through the high Pamir mountains. The road was a link to the old Silk Road trade route.
The historical Pamir Highway travels through the Central Asian nations of Afghanistan, Uzbekistan, Tajikistan, and Kyrgyzstan. The modern M41 extends further from Osh to Kara-Balta in the western suburbs of Bishkek ( Kyrgyzstan).

M41 highway It was also one of the many roads of the legendary trade route  ”Silk Road”. Even Marco Polo went through here The Pamir Highway is designated as the M-41 route for most of its length in Tajikistan and Kyrgyzstan, and is known as the second highest international road in the world (4655 m). The section between Dushanbe and Murghab is part of the European route E 008.In 2000s Pamir Highway was connected with China and Karakoram Highway.

In the 1985 movie ”Spies Like Us”, the GLG-20 decoys played by Chevy Chase and Dan Aykroyd are told to find their contacts on the “road to Dushanbe,” a reference to the M41 road.

There are still some checkpoints along the Pamir Highway   to fight  drug smuggling from Afghanistan, In addition, areas are mined off the Pamir Highway between Chorugh and Dushanbe and along the Afghan border. Since 2002, a joint initiative force  by the OSCE and the FSD has sought to clear the remnants of these mines spread during the Tajik civil war.
Today, the Pamir Highway is a popular destination for foreign cyclists and motorcyclists.has become one of the most epic and emblematic road trips . In addition to the regular visa for Tajikistan, a special permit for the autonomous province of Berg-Badakhshan is required for driving on the Pamir Highway, which can be additionally requested from an embassy.

Route description : The eastern section Os-Khorugh is 730 km long, while the western part, from Khorugh to Dusanbe, is 520 km /

Note : Caution! some parts of this route are classified as “the most dangerous roads of the world” and it takes a lot of attention but also preparation by travelers.
The route is mostly dirt road. In winter, the road may close in some sections due to the danger of avalanches.The Pamir Highway is very safe. The people are lovely and rarely has any crime been heard.

Go next : M41 highway, which starts at Termiz and ends at Kara-Balta to the west of Bishkek, Kyrgyzstan / European route E007, E 007 is a European B class road in Uzbekistan and Kyrgyzstan, connecting the cities Tashkent – Kokand – Andijan – Osh – Irkeshtam.