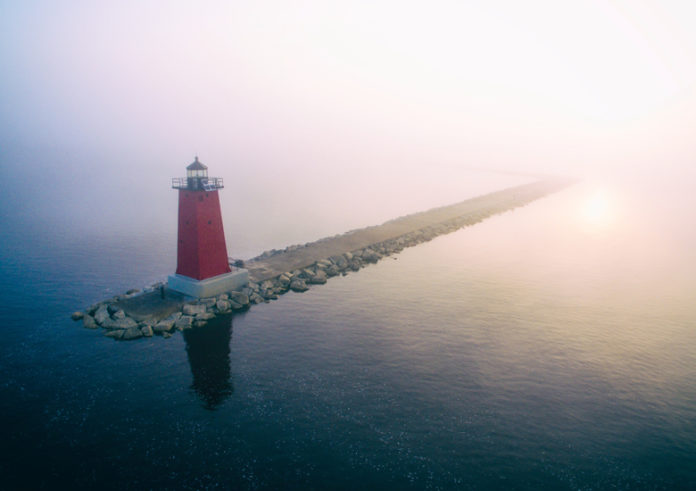 The Manistique East Breakwater Light is a landmark along the northern shore of Lake Michigan in Manistique. It was listed on the National Register of Historic Places in 2005.

In 1914, the Greilling Brothers were contracted to build the Manistique East Breakwater Lighthouse, fog signal, and the Keeper’s dwelling. This new lighthouse replaced the obsolete pier head lights that had protected the shipping canal on the Manistique River. The lighthouse was completed in 1915, along with the fog signal, though the light was not activated until August 17, 1916. In the same year, the Keeper’s dwelling was built on the corner of Range and Washington Street.
The station was first established in 1915. The current lighthouse was first lit in 1917.In 2012, efforts were made under the National Historic Lighthouse Preservation Act of 2000 to convey the lighthouse to an eligible entity at no cost. When no such entity assumed stewardship of the lighthouse, it was made available for sale via GSA Auctions. The auction closed July 15, 2013, and the lighthouse was bought by a private individual.

Tip : The lighthouse and keepers’ dwelling are privately owned. Grounds open, dwelling/tower closed , There is ample parking and a board walk that leads along the beach

The Underwater waterfall in Mauritius