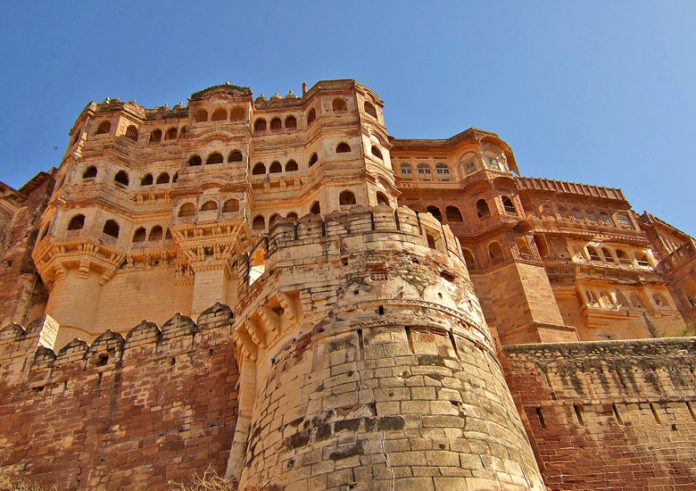 Mehrangarh is the name of a fortification in the northwest Indian state of Rajasthan. It is located at a height of 123 meters on a single rock and towers over the city of Jodhpur, from which leads up a winding road for five kilometers along the mountain. the construction was started at the same time with the founding of the city Jodhpur in 1459 by Roa Jodha. Large parts of the buildings still preserved date from the period of the Maharaja Jaswant Singh (1638-1678). The entrance of the fort leads through seven gates. This includes:

Jai Pol (“Victory Gate”), built in 1806 by the Maharajah Man Singh to celebrate a victory over Jaipur and Bikaner.
Loha Pol, (“Iron Gate”), carries the handprints of six queens who were burned in 1843 as widows of the Maharaja Man Singh.
The fortress is still owned by the descendants and was inhabited until 1943 by the princely family.

The plateau has three areas: the palace to the northwest, a large terrace east of the palace, and the heavily fortified part to the south. In the fort Liz Hurley married the entrepreneur Arun Nayar.Mehrangarh is one of the most magnificent forts in India

Access : Coordinates: 26.298056, 73.018889 / about a 300m walk up from the old city to the entrance / By train : The Mandor Express leaves Delhi at 8:45 pm and arrives in Jodhpur at 8:00 am the following day.
/ By Bus
Jodhpur is also considered as the head of state’s road transport. Apart from this, Delhi, Ahmedabad, Surat, Ujjain, Agra, Mumbai, Pune and Bangalore etc are connected to the neighboring states such as Deluxe and Express bus services. Rajasthan State Road Transport Corporation offers Volvo and Mercedes-Benz bus services to Delhi. While Ahmedabad, Jaipur, Udaipur and Jaisalmer have recently started in the city with Bus Rapid Transit System (BRTS) Low Floor and Semi Low Floor buses running on the main roads.
/ By air : Jodhpur Airport is one of the major airports in Rajasthan , Currently, daily flights run for Delhi, Mumbai, Udaipur, Jaipur, Bangalore and Pune to operate here by Air India and Jet Airways and SpiceJet.
Get around : There are deluxe and express bus services to the city. In the city one can travel by auto rickshaws, buses, cycle rickshaws or cabs

Site layout : Attractions :
The Mataji Temple : The chamunda Mataji was Rao Jodha’s favorite goddess, he brought her idol from the old capital of Mandore in 1460 and installed her in Mehrangarh
Rao Jodha Desert Rock Park : The park contains ecologically restored desert and arid land vegetation.
National Geological Monument :This unique geological feature is part of the Malani Igenus Suite seen in the Thar desert region , has been declared a National Geological Monument by the Geological Survey of India
The famous Kilkila cannon :
Chokelao Garden : is situated right below the Mehrangarh Fort and though it belongs to the 18th century, the garden has been restored. It also has a restaurant.
Nagnechji Temple : This temple is located on the extreme right of the fort. It was built in the 14th century
Moti Mahal  , Pearl Hall. Pearl-coloured inside and decorated with coloured glass windows
Sheesh Mahal -Mirror Hall / Phool Mahal -Flower Hall / Zenana Deodi. The inner sanctum of the palace /
Galleries in Mehrangarh Museum : The Turban Gallery , In Rajasthan; every community, region, and festival having had its own head-gear and they all displaying here / Daulat Khana – Treasures of Mehrangarh Museum , This gallery displays one of the most important and best-preserved collections of fine and applied arts of the Mughal period of Indian history /
Palanquins / Elephant’s howdahs / Paintings / Armoury /