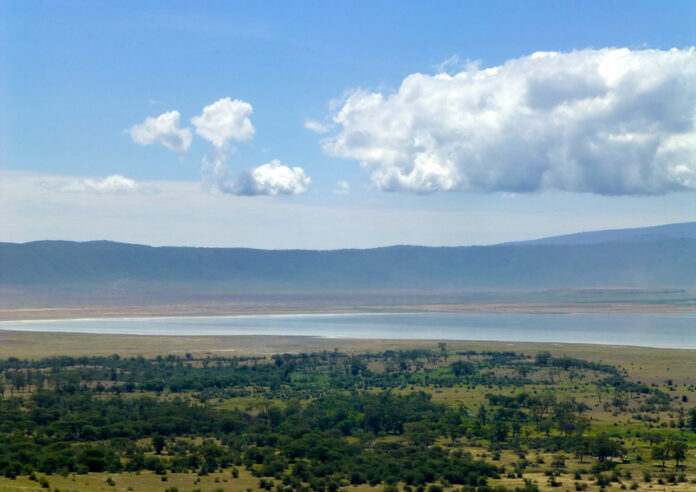 The famous Ngorongoro Crater is the  world’s largest inactive, intact and unfilled volcanic caldera, a UNESCO World Heritage Site. Ngorongoro is located in northern Tanzania, at the western edge of the Great African Rift (or, as it is also called, the Great Rift Valley) – stretching from the Red Sea to Mozambique for 6,750 kilometers and crossing almost 20 countries.
The Ngorongoro Crater was formed over 2.5 million years ago by the eruption of a huge volcano.
The depth of the crater is 610 m. Its edges rise to 2286 m above sea level. The diameter of the Ngorongoro crater ranges from 17 to 21 km, with a total area of ​​approximately 265 km². At the bottom of the crater is Lake Magadi, famous for the flamingo population.
In the language of the Maasai tribe, “Ngorongoro” means “Huge hole”. According to another version, the name Ngorongoro comes from the name of the leader of the ancient Masai warriors.
Bernhard Grzimek founded the Serengeti Research Institute in Frankfurt in the 1960s, which collected valuable information on the (migratory) behavior of numerous species and helped preserve them. Near the crater is the Olduvai gorge, where traces of the Olduvai culture were first found (which gave it its name). At the edge of the crater, zoologists Michael Grzimek (died 1959) and Bernhard Grzimek (died 1987), who studied the area, are buried.

The Ngorongoro Conservation Area is one of the major tourism sites in Tanzania with several tens of thousands of visitors per year who come mainly for the wildlife but also for the landscapes,The reserve is easily accessible and has an excellent tourist infrastructure. the population and the archaeological sites.This is one of the most famous nature reserves in Tanzania. And concurrently, one of the best safari destinations on the continent.

Access : Coordinates: -3.21, 35.46 / Location :
The Ngorongoro Reserve is located in northern Tanzania, on the border with Kenya, at the western edge of the African Rift Zone, 210 km from the city of Arusha.( Arusha is a city in north eastern Tanzania and the capital of the Arusha Region, ) / The easiest way to get to the park is from Arusha, which is the regional center. / By car from the city of Arusha : The park is 180 kilometers away, you can get there in about 4 hours. keep in mind that the entrance to the Ngorongoro reserve is only open to cars with four-wheel drive and a panoramic roof.

Go next : Want to see hundreds of colorful flamingos? – Go to Lake Magadi in Ngorongoro Crater / Masai tribe settlements / Olduvai Gorge, one of the most important paleoanthropological sites in the world.