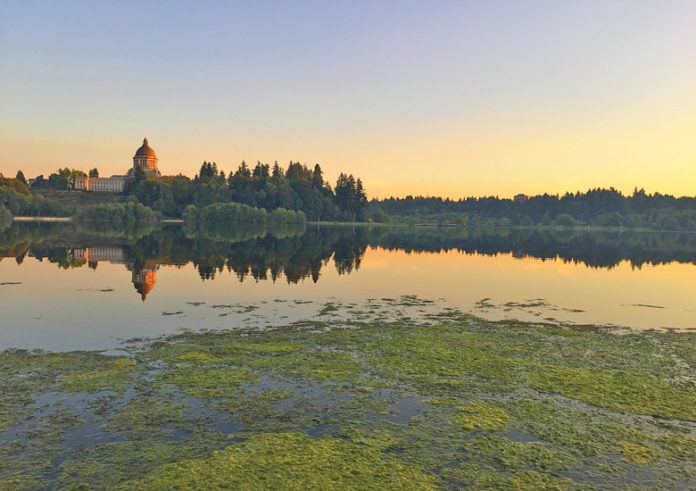 The city reflects a diverse economic base and culture. It has a population of 46,478 (2010 Census) and is also home to The Evergreen State College, one of six public four-year schools in Washington. Olympia’s art and music scene is unusually large and active for a town of its size, and its identity as a city remains distinct despite strong influences from Seattle, Tacoma and Everett to the north and from Portland/Vancouver to the south. Olympia is somewhat of a breeding ground for Pacific Northwest alternative culture having spawned or influenced many of the region’s better-known personalities.

The city’s downtown core has been designated as a National Historic District. The natural beauty of Olympia is of particular note. From downtown, one can see the Olympic Mountains to the northwest set behind Puget Sound’s Budd Bay – and towering Mt. Rainier to the southeast set next to the state capitol building and Capitol Lake.

From Interstate 5 (I-5) Olympia is accessed from exits #99 (“93rd Ave SW”) through #109 (“Martin Way E”) along I-5. Downtown can be accessed from Exit #105 (“State Capitol City Center/Port of Olympia”) from both directions. The off ramp comes into town as 14th Ave SE towards the state capitol. From the northbound lanes the off ramp from Exit #105 further splits to #105A which goes into 14th Ave SE or #105B which goes into Plum Ave SE on the east side of the downtown core. Or exit off at Pacific Ave at Exit #107 which comes into downtown as State Ave NE.
US Hwy 101/SR-8 From I-5 US-Hwy 101 is at Exit #103. If going west, the same highway becomes SR-8 after going past the US-Hwy 101 turnoff towards Shelton and Port Angeles.
From Kitsap Peninsula Go south on Hwy 3 and follow signs for “Hwy 3 South Belfair” Continue south along WA-3 through Belfair and Shelton where it ends into US-Hwy 101 south of Shelton. Merges into a freeway continuing east into Olympia as US-Hwy 101 or west to Aberdeen as SR 8.

5 Amtrak, Olympia-Lacey Centennial Station @ 6600 Yelm Hwy Se (Along Yelm Highway SE, past Compton Blvd Se.). The following are the Amtrak routes serving Lacey/Olympia:
Amtrak Cascades… runs between between Seattle and Portland 4x daily serving Tukwila, Tacoma, Lacey (Olympia), Centralia and Kelso in Washington state. They run from Seattle to Vancouver via Everett, Mt Vernon & Bellingham 2x daily and from Portland to Eugene via Oregon City, Salem & Albany 2x daily. Additional service from Seattle to Vancouver and from Portland to Eugene are provided on the Amtrak Thruway Bus.
Amtrak Coast Starlight makes an once daily trip in each direction between Seattle and Los Angeles along the same route with the same stops as the Amtrak Cascades (except Tukwila & Oregon City) between Seattle and Eugene, OR.

Get around
Olympia’s numbered streets run East-West, and the city is broken into four quadrants with the center point in downtown. Northwest, Northeast, Southwest and Southeast. These indicators come after any address.
Capitol Way is the main north – south street in the downtown area. Fourth Avenue is the main connector that runs through downtown east – west.
The city’s downtown district lies in the middle of what residents refer to as the Westside and the Eastside. Most residents of the city will claim these two areas are distinctively different.
Intercity Transit operates the bus system. $1.25 per trip or $2.50 for a day pass.