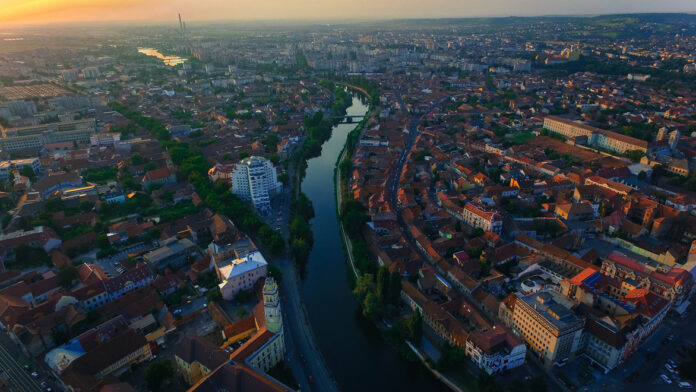 Oradea  is a city in the far northwest of Romania, not far from the border with Hungary. Oradea is located on the eastern edge of the Great Hungarian Plain on the River Crișul Repede.

The city center is 13 km from the Hungarian border. The foothills of the Apuseni Mountains end on the northeast edge of the city. The castle and thus also the city are strategically located at the opening of the Kreisch Valley into the Great Hungarian Plain at an average height of 126 m. The river flows almost centrally through the city. The train station is north of the Schnellen Kreisch, the castle on the south bank.

Oradea was first mentioned in Latin as Varadinum in 1113. The Oradea Fortress, the ruins of which are still there today, was first mentioned in 1241 as a hasty repair and reinforcement began. Mongol-Tartar attack on the city. But it was not until the 16th century that the city began to grow as an urban center. In 1700, the Viennese engineer Franz Anton Hillebrandt made a plan of the city in Baroque style and, starting from 1752, many notable places were built such as the Catholic Cathedral and the archbishop’s palace and the Museum of the Land of Christ.
According to the Trianon Treaty, after the First World War, Oradea passed to Romania. During the Second World War, Hungary captured Northern Transylvania, but the situation with the return was repeated in 1947, when the region again ceded to Romania through the Paris Peace.

Oradea  has been the commercial and cultural center of Western Romania for hundreds of years. The current architecture of Oradea is a mixture of Communist-era apartment buildings, mainly in the suburbs, and the beautiful historic buildings that are remnants of the time when the city belonged to Austria-Hungary empire. In addition to the many Baroque buildings, Oradea is distinguished for a particularly rich collection of Art Nouveau architecture.
Oradea plays an important tourist role in Romania because it is close to two of the most famous spas in the country, Băile Felix and Băile 1er mai, located in the municipality of Sânmartin a few kilometers south of the city. The sights of Oradei  are almost all in the center, so the tour will take a maximum of 3-4 hours.

Access : Coordinates:47.072222, 21.921111 / Oradea is on the European route E 60, which leads here from the Hungarian capital Budapest. It is a good 500 km from Vienna, which takes around 5½ hours of pure travel time.
/ Oradea is an important railway junction in the west of the country which is united by the Intercity of Romanian Railways to the cities of Timișoara, Cluj-Napoca, Brașov, Arad, Ploiești and Constanța. Oradea is the terminus of the masterful 300 Bucharest-Oradea. It is also located on the international lines Brașov-Budapest and Cluj-Napoca-Budapest.The city has four stations.
/ Orada has its own airport with several airlines flying from. Including low-cost airline Ryanair. It flies to Bergamo (Italy), Girona (Spain) and Memmingen (Germany).
/ Public transport in Orada is poorly developed: there are a couple of tram and bus routes. But tourists don’t really need it, all interesting places can be reached on foot. There are both single tickets (5 lei) and daily tickets (13 lei). Parking in the city center is paid. 1 hour – 2.6 lei. You don’t have to pay on Saturday and Sunday.

Activities : sightseeing, The easiest way to explore the city is to start from the main square, / photo opportunities / Discover the story of the hidden palaces on Oradea / Enjoy an ice cream, taste traditional dishes, have a coffee or just go for a walk on the Republic Road!

Go next : The Băile Felix health center, which is located outside the city and can be reached by train. / Arad , a city at the western edge of Romania / Cluj-Napoca , the capital of Cluj county and the unofficial capital of the historical region of Transylvania. / Satu Mare , a city in Maramureș, Romania.
/ take a ride to Debrecen , Debrecen is the “capital city of the Great Hungarian Plain”, and the county seat and largest city of Hajdú-Bihar county in eastern Hungary.