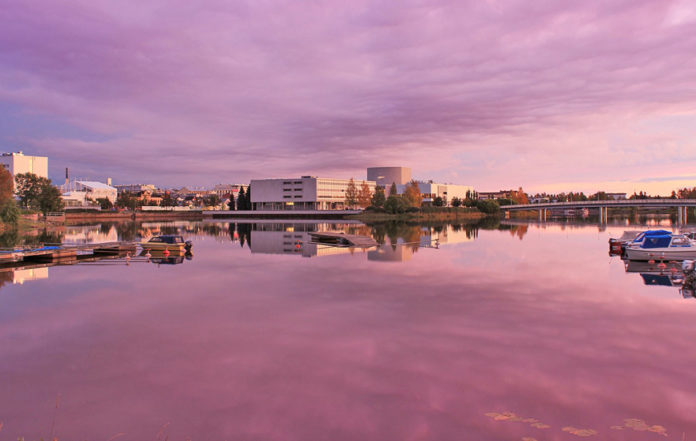 Oulu  is the biggest city in Northern Finland, with some 200,000 inhabitants (counting by the administrative borders, the city itself has a little less).
Oulu is the capital of the province of Oulu and the region of Northern Ostrobothnia. It is the fifth largest municipality in Finland by population and the largest and most important in Northern Finland. As a result of two consolidations of neighbouring municipalities, first Ylikiiminki on January 1st, 2009, and then Haukipudas, Kiiminki, Oulunsalo and Yli-Ii on January 1st 2013, its land area is over 3,000 km² (five to ten times the size of other similar sized cities in Finland). As urban area it comes fourth, after the capital region, Tampere and Turku.

Oulu was founded in 1605 by the Swedish King Karl IX at the mouth of Oulujoki river, on the opposite bank of Oulu Castle. The castle was destroyed after a lightning strike in 1793 and never rebuilt. In 1822 the city was severely damaged in a fire, and during its reconstruction, the city centre got the look it still has today.

Historically Oulu has been known for its tar and salmon production Today it is however more known for its high-tech focus, with free wireless Internet access, Panoulu, in the city centre. A lot of Finnish IT companies, including Nokia, have offices in Oulu or nearby areas. In 1988 Jarkko Oikarinen wrote the first IRC server and client here. Oulu is also home to Oulun Karpat, a successful hockey team playing in the top Finnish league, Liiga.

Access : Coordinates : 65.016667, 25.466667 / By plane :  Oulu Airport is the busiest in the country after Helsinki, and the Helsinki–Oulu sector is the country’s most popular domestic flight with frequent services (around ten flights per day each way) by Finnair and Norwegian. A fully flexible return economy ticket might cost more than €200 but a non-changeable one-way ticket can go as low as €39 or a return ticket for €78 when bought months in advance. Norwegian is often cheaper, but airlines compete on price for this route so be sure to check Finnair, too. If you are under 26 years old, be sure to use the code ALLE26 to get cheaper prices for the trip (you can find flights for as low as €29 from the LowFare calendar). There are also some services to Lulea, Sweden, and Tromso, Norway by Arctic Airlink.

The terminal has recently been expanded and now has jet bridges to get you in the planes without having to walk in the freezing cold tarmac. The airport has an automatic map dispenser that provides free maps, but sometimes it doesn’t work.  Bus lines 8 and 9 (Adult €5,80, child 2,90 40 minutes) connects the airport to the city centre. The buses which operate from/to the airport have a plane symbol on the front panel and usually contain luggage racks. The main bus stop in the city centre is Toripakka. Buses operate quite frequently from 06:25 to about 21:00 on weekdays. After 21:00 buses operate infrequently to 01:30. A taxi will cost you around €30 for the same distance. To get to the Oulu University, either use the bus 8 (Teknologiakyla) or change to the bus line 1 (Jylkynkangas), 2 (Ritaharju), 3 (Ritaharju). Buses to the university from the city center cost €3.30 for adult and €1.70 for children.

By train :  Oulu is on the railway main line between Helsinki and Rovaniemi. The fastest Pendolino trains complete the journey from Oulu to Helsinki in about 6 hours (starting at €24.50 when bought in advance), while direct night trains take around 9 hours (€21.50 when bought in advance, or €64 plus optional sleeper at €12–31 per bed, advance tickets do not allow the booking of a bed). The newest type of sleeper train carriages have a shower and a toilet in each 2-person cabin. As when going to Rovaniemi, you can also take your car with you on the overnight train. The Saver ticket is always the most affordable choice. Only a limited number of Saver tickets are available and no discounts are offered for them. The Saver ticket lets you choose your travel dates flexibly. Saver tickets are offered 60 days before your departure. You can change your ticket for €5 and pay a €10 cancellation insurance. You can buy tickets from the train station or from vr.fi.

By bus :  Trip duration from Helsinki varies between 8 and 15 hours and costs around €70–80, but using the cheaper Onnibus, you can get trip with a price as low as 15€. Timetable and information from Matkahuolto and Onnibus

By boat :  Oulu is at the mouth of the Oulujoki river, thus reachable by yacht in summer and autumn. 1 Meritulli,  +358 400-474-180, e-mail: myynti@kahvilamakasiini.net. 06:00–24:00, after mid August 07:00–16:00. Marina in the river delta, by the Market square. WC, showers, sauna, kitchen, washing machines, fuel, water, electricity, septic tank emptying. Fairway depth 2.3 m. €12/night (sauna not included, electricity €2), €5 for day visit, €2 for short visit..
By car :  Oulu is on the Finnish National Road 4, which runs from Erottaja in Helsinki to Sami Bridge in Utsjoki, and is 1295km long (making it the longest in Finland). The national road 4 is also part of the E75 route which connects Northern Norway to Greece. The city centree has an underground car park, constructed in 2015, which stretches through the whole city center. There are two entrances to it; Hallituskatu 1 and Hallituskatu 20; of which the Hallituskatu 1 entrance next to the marketplace is probably easier to reach. The website for Kivisydan

events :  Hassakkapaivat: 8–9 July. A punk / hardcore music festival
Jalometalli: 8–9 July. A metal music festival
Rotuaari Piknik: 13–16 July. Music festival in a garden setting in Oulu
UFOP: 15–16 July. Uleaborg Festival Of Psychedelia is a festival focusing on modern music and art
International Air Guitar Festival. Yearly, beginning of August. Just as the name tells, a competition where the objective is to pretend to be playing a guitar as lively as possible.
Elojazz: 4–7 August. A jazz festival in the parks and restaurants of the city.
Koiteli elaa!: 20–20 August. Koiteli elaa! is a small rock festival arranged in the scenic Koiteli area in Kiiminki, Oulu in conjunction with Oulu August Festival and has been sold out in advance for years.
Qstock: 29–30 August. A rock festival of strong traditions.
Lumo Light Festival (Valoa Oulu!): . Lumo Light Festival fills up the city center with numerous lightartworks for a week in November. free.