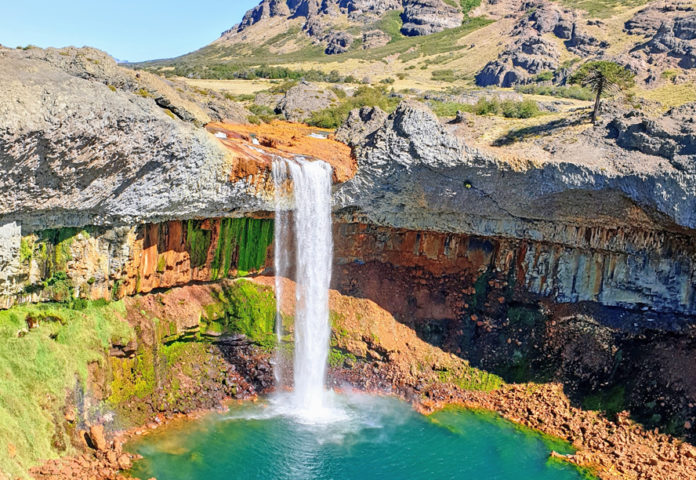 The Salto del Agrio is a waterfall of more than 40 meters located in the province of Neuquen, 18 kilometers from the town of Caviahue, at the Neuquén Province in Argentina.

The Salto del Agrio is one of those attractions of Argentine Patagonia less known by mass tourism. It is located in the province of Neuquen, about 18 kilometers from Caviahue.
a waterfall that ‘makes the leap’ from 40 meters falling into a lagoon closed by parts of stone between colors ranging from ocher, orange, red, yellow and green, Tones that derive from the particular composition of the site, especially from the presence of iron and sulfur that are carried away by the water. The Salto del Agrio is the result of the ancient volcanic activity of the area.

Access to the Salto del Agrio, in the Copahue National Park, is free and reaching it is not a complicated undertaking. You can get there by any means, including bicycle.

Access : Coordinates: / Location: Northeast of Caviahue 18km from the same town within the Copahue Provincial Park.

Go next : Caviahue, a mountain village located 1,600 meters over sea level / Neuquen,the capital city of the Argentine province of Neuquén.