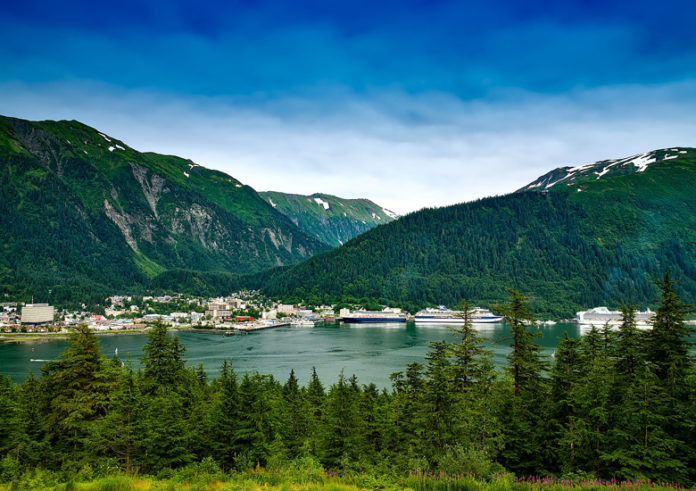 The City and Borough of Juneau , commonly known as Juneau, is the capital city of Alaska. It is a unified municipality located on the Gastineau Channel in the Alaskan panhandle, and it is the second largest city in the United States by area.

Juneau has been the capital of Alaska since 1906, when the government of what was then the District of Alaska was moved from Sitka as dictated by the U.S. Congress in 1900. The municipality unified on July 1, 1970, when the city of Juneau merged with the city of Douglas and the surrounding Greater Juneau Borough to form the current municipality, which is larger by area than both Rhode Island and Delaware.

Downtown Juneau  is nestled at the base of Mount Juneau and across the channel from Douglas Island. As of the 2010 census, the City and Borough had a population of 31,276. In 2014, the population estimate from the United States Census Bureau was 32,406, making it the second most populous city in Alaska after Anchorage. Fairbanks, however, is the second most populous metropolitan area in the state, with roughly 100,000 residents. Juneau’s daily population can increase by roughly 6,000 people from visiting cruise ships between the months of May and September.

Juneau is rather unusual among U.S. capitals (except Honolulu, Hawaii) in that there are no roads connecting the city to the rest of Alaska or to the rest of North America (although ferry service is available for cars). The absence of a road network is due to the extremely rugged terrain surrounding the city. This in turn makes Juneau a de facto island city in terms of transportation, since all goods coming in and out must go by plane or boat, in spite of the city being located on the Alaskan mainland. Downtown Juneau sits at sea level, with tides averaging 16 feet (5 m), below steep mountains about 3,500 feet (1,100 m) to 4,000 feet (1,200 m) high. Atop these mountains is the Juneau Icefield, a large ice mass from which about 30 glaciers flow; two of these, the Mendenhall Glacier and the Lemon Creek Glacier, are visible from the local road system. The Mendenhall glacier has been gradually retreating; its front face is declining both in width and height.

The Alaska State Capitol in downtown Juneau was originally built as the Federal and Territorial Building in 1931. Prior to statehood, it housed federal government offices, the federal courthouse and a post office. It also housed the territorial legislature and many other territorial offices, including that of the governor. Today, Juneau remains the home of the state legislature and the offices of the governor and lieutenant governor. Some other executive branch offices have moved elsewhere in the state. Recent discussion has been focused between relocating the seat of state government outside Juneau and building a new capitol building in Juneau; neither position has led efforts to keep the capital in

History : Long before European settlement in the Americas, the Gastineau Channel was a favorite fishing ground for the Auke  and Taku tribes, who had inhabited the surrounding area for thousands of years. The A’akw Kwaan had a village and burying ground here. In the 21st century it is known as Indian Point. They annually harvested herring during the spawning season, and celebrated this bounty.

Since the late 20th century, the A’akw Kwaan, together with the Sealaska Heritage Institute, have resisted European-American development of Indian Point, including proposals by the National Park Service and the National Oceanic and Atmospheric Administration (NOAA). They consider it sacred territory, both because of the burying ground and the importance of the point in their traditions of gathering sustenance from the sea. They continue to gather clams, gumboots, grass and sea urchins here, as well as tree bark for medicinal uses. The city and state supported Sealaska Heritage Institute in documenting the 78-acre site, and in August 2016 it was listed on the National Register of Historic Places. “It is the first traditional cultural property in Southeast Alaska to be placed on the register.”

Descendants of these indigenous cultures include the Tlingit people. Native cultures have rich artistic traditions expressed in carving, weaving, orating, singing, and dancing. Juneau has become a major social center for the Tlingit, Haida, and Tsimshian of Southeast Alaska.  Although the Russians had a colony in the Alaska territory from 1784 to 1867, they did not settle in Juneau. They conducted extensive fur trading with Alaskan Natives of the Aleutian Islands and Kodiak. Some ships likely explored this area, but did not record it. The first European to see the Juneau area is recorded as Joseph Whidbey, master of the Discovery during George Vancouver’s 1791–95 expedition. He and his party explored the region in July–August 1794. Early in August he viewed the length of Gastineau Channel from the south, noting a small island in mid-channel. He later recorded seeing the channel again, this time from the west. He said it was unnavigable, being filled with ice.

Mining era : After the California gold rush, miners migrated up the Pacific Coast and explored the West seeking other gold deposits. In 1880, Sitka mining engineer George Pilz offered a reward to any local chief in Alaska who could lead him to gold-bearing ore. Chief Kowee (Tlingit Kaawa.ee) arrived with some ore, and several prospectors were sent to investigate. On their first trip to Gold Creek, they found deposits of little interest. However, at Chief Kowee’s urging, Pilz sent Joe Juneau and Richard Harris back to the Gastineau Channel, directing them to Snow Slide Gulch (the head of Gold Creek). There they found nuggets “as large as peas and beans,” in Harris’ words.

On October 18, 1880, the two men marked a 160-acre (650,000 m2) town site where soon a mining camp sprang up. Within a year, so many miners had arrived that the camp became a village, albeit made up mostly of tents and shacks rather than substantial buildings. It was the first European American settlement to be founded in this territory after the United States purchased Alaska. By the autumn of 1881, the village had a population of over 100 and was known as Rockwell, after Lt. Com. Charles Rockwell; later it was known as Harrisburg after prospector Richard Harris. On 14 Dec. 1881, a miners’ meeting of 72 persons decided to name the settlement Juneau, after prospector Joe Juneau. Perhaps they changed the name to be more distinctive, as another Harrisburg is the capital of Pennsylvania.

activities : Juneau makes for a great jumping-off point for outdoor activities all over the northern Panhandle, as well as an excellent home base to explore Southeast Alaska.

Acces : The Alaska Marine Highway System has been operating year-round since 1963, with regularly scheduled passenger and vehicle service to 33 communities in Alaska, plus Bellingham, Washington, and Prince Rupert, British Columbia. There are currently eleven vessels in the AMHS fleet, additional ferries have been planned.

Juneau International Airport (JNU) is a city owned, public use airport and seaplane base located 8 miles northwest of the central business district of Juneau. The airport serves as a regional hub for all air travel, both bush carriers and the regional airline, Alaska Airlines.

Alaska Airlines is the only jet service provider to Juneau and offers daily connections north from Seattle and south from Anchorage. Jet service is also available from Juneau to other southeast communities, including Gustavus, Sitka, Wrangell, Petersburg, and Ketchikan.