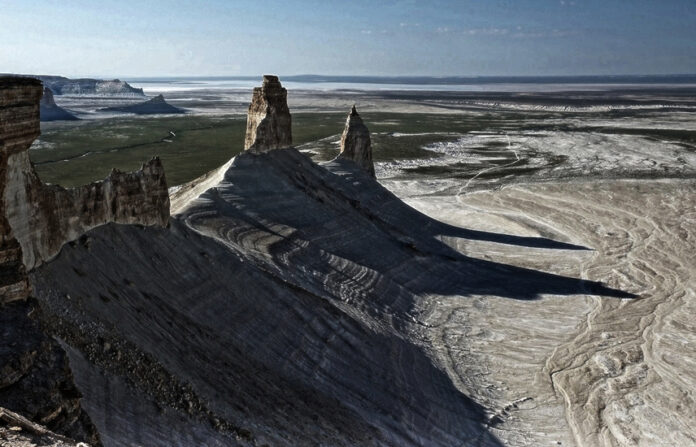 The Ustyurt Plateau or Ust-Urt Plateau is an extensive, desert to steppe-like plateau in Central Asia. in the territories of Kazakhstan , Uzbekistan, Turkmenistan and , covering 200,000 km². It is bordered by the Aral Sea to the east and the Caspian Sea to the west.

Traditionally, the human population of the region is nomadic and dedicated to pastoral activities mainly goats, sheep and camels, without definitively settling in a region.
The richest deposits of fossils, containing almost the entire periodic table. The oldest on the territory of Kazakhstan and the CIS, and if you search well, then, perhaps, all over the world, the sites of primitive man, almost imperishable fortifications, the mounds of Sarmatian and Scythian burials still untouched by a human hand.

The remains of the caravanserais of one of the branches of the Great Silk Road, through which gigantic caravans once went, composed not even of hundreds, but of thousands of camels. Wells, up to 50 meters deep, manually hammered by ancestors-kudukshi in limestone, several pieces at once in one bunch.

Access : Coordinates: / Aktau a city in Kazakhstan, located on the Eastern shore of the Caspian Sea : 43.65, 51.15
/ A good SUV is a must to get around the area.You can also rent a UAZ “tablet”- “loaf” for 8-9 seats. It will come out much cheaper, but there will be little comfort.
/ Expedition route: Aktau-Torysh (valley of globular nodules) -Sherkala-Tuzbair  -Beket-ata-Bozzhira  -Valley Karagiye-Aktau.

Go next : the city of Aktau , a city in Kazakhstan, located on the Eastern shore of the Caspian Sea / Samal-Sherkala, 150 km from Aktau, is an area formed by extreme geological instability / travel further east to the Silk Road cities in Uzbekistan.