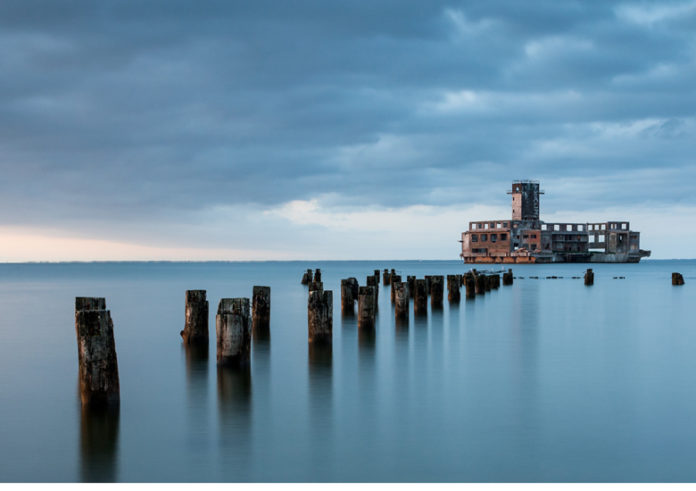 Torpedownia – the Polish name of the central facility of German torpedo research centers in the Bay of Puck, in the Gulf of Gdansk in Poland , built in occupied Poland during World War II. Torpedownia was a torpedo assembly hall with equipment for trial shooting, built on the bottom of the reservoir, a few hundred meters from the shore. Connected to the shore of the pier, after which the transport of torpedo components, eventually mounted in the hall, took place using a narrow-gauge railway.

Torpedownia  was put into use in 1940. The order establishing the Luftwaffe torpedo research centers was signed in November 1940. TWP was solemnly opened on July 4, 1942.  and finally  the Germans evacuated the  launch station at April 5, 1945.

Todays use : After the Second World War, a new torpedo facility (Formoza) was built about six kilometers further south, near the naval port of Gdynia. The old complex, known in Poland as Torpedownia, is left to decay and its ruins with the remains of the pier are still there today.the station It is completely abandoned, although authorities allow diving in the vicinity and access it in boats.

Access : Coordinates: 54° 35.266′ N 18° 32.744′ E / The torpedownia torpedo launch station   is located approx two hundred meters from the shore and only 5km north of Gdynia Port. –  around 10km north of central Gdynia in the Babie Doly (formerly Hexengrund) district. more convenient to go with a car, but there are also buses from Gdynia taking you close to the beach and close to the Torpedownia.