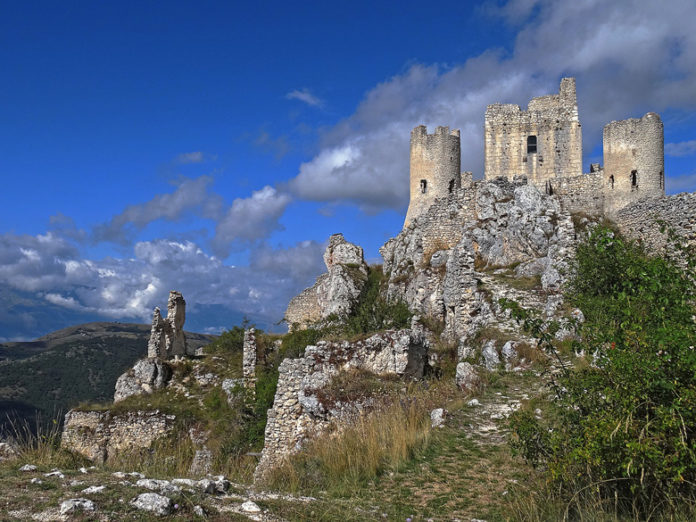 The Rocca Calascio is the ruin of a hilltop fortress in the Italian municipality of Calascio in the province of L’Aquila. It rises in the interior of Abruzzo and, at 1,460 m, is the highest fortress complex in the Apennines, around 1000 years old.

The fortress was built in stone and has a purely military purpose to shelter the troops. Its construction began in the 10th century, with a simple observation tower. In the 13th century the walls with four cylindrical towers were added around the original building.
Situated at an altitude of 1,460 meters, the fortress is the highest fortification in the Apennines. It is located in the Gran Sasso and Montes de la Laga National Park, on the edge of Campo Imperatore.In the years 1461 and 1703 the facility was badly damaged in very severe earthquakes. While the town of Calascio, which lies below the fortress, was rebuilt, this did not happen with the fortress.
The magical atmosphere that distinguishes this village, its history and the magnificent surrounding views have made Rocca Calascio not only a very popular destination in Abruzzo but also a perfect set where some famous directors have set scenes from famous films.

Go next : In the vicinity of the castle is the Church of Santa Maria della Pietà. An octagonal construction,  built by the shepherds of the area in the year 1596.