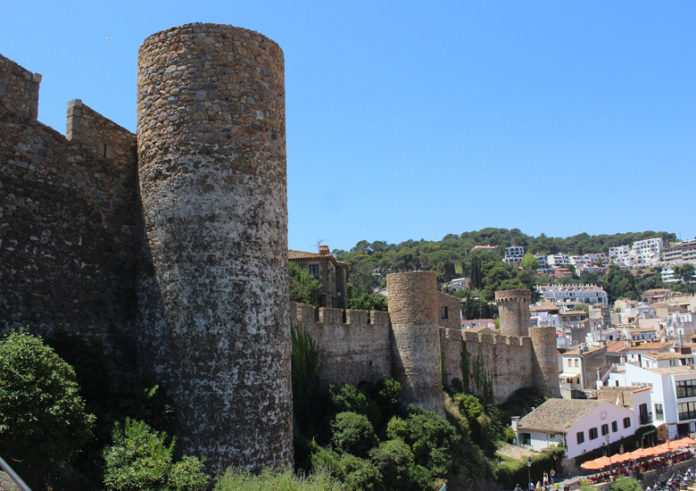 Tossa de Mar  is a municipality in Catalonia, Spain,

Located on the Costa Brava, about 103 kilometres north of Barcelona and 100 kilometres south of the French border. It is accessible through Girona Airport, some distance north. History : There is ample evidence of settlements dating back to the Neolithic period, and it is believed that the area has been continuously populated since that time. Between the 4th-1st century BC the first Iberian settlements appeared, followed shortly after by the Romans in the 1st century. In 966 Tossa was ceded by Count Miro of Barcelona to the Abbey of Ripoll. Some two centuries later, in 1187 Tossa was granted its charter by the Abbot of Ripoll, coinciding with the building of a church atop Mount Guardi, the remnants of which can still be seen today.

Sometime in the 12th century the medieval town was walled off and a castle was built on the highest point of Mt. Guardi, this castle was to be subsequently replaced by a wind mill, and this in turn by a lighthouse which is still operational. By the year 1500 the first houses were built extra-murs to accommodate population growth. This process was greatly accelerated during the 17th and 18th centuries, shaping an urban configuration which was to remain practically unchanged until the arrival of mass tourism in the 1950s. In 1989 Tossa de Mar was the first place in the world to declare itself an Anti-Bullfighting City.

Access : Coordinates:41.720556, 2.932222 / If not on a package deal, usually a Ryanair flight to Girona airport. From there a shuttle bus booked on the internet for between 12 and 16 euros each way to the resort. Best to book a return trip and you have to phone them to confirm the day before leaving. Warning: A few shuttle buses will do all the more distant resorts first before ending up in Tossa de Mar. There is a wall phone for taxis at the Tourist Office next door to the bus station. Other telephones take cash or card.

Municipal museum :  The Municipal Museum, built in Late Gothic style, is situated in the Governor’s House, inside the Vila Vella enceinte. It used to be the residence of the jurisdictional governors of Tossa de Mar and its environs, who ruled for the Abbots of the monastery Santa Maria de Ripoll.

The museum was opened on 1 September 1935. It houses an important collection of contemporary art with works of Spanish and foreign artists who frequented Tossa de Mar during the 1930s, such as the Celestial Violinist by Marc Chagall. The archaeological section houses artefacts dating from the Paleolithical Period to the Late Middle Ages. Of particular note are the mosaics found in the atrium of the Roman Villa of the Ametllers, dating from the end of the 4th – beginning of the 5th century.

Activities : Some nice beaches. Sand is gravelly which is fine to walk and sit on and won/t sand blast you if there is some wind. Public toilets at either end of the main beach as well as near a further beach. A blue and white tourist train (a motor vehicle disguised as a train pulling 3 carriages) does tours of the town. Another (green) train will take you up to the top of the fort if you don/t feel like walking. A glass bottom boat which enables you to see fish and such and explores local grottoes. SCUBA and PADI diving: A number of shops around town to buy or hire cylinders and gear from as well as “diving schools” where you can dive with others. Well worth checking out Splash Ocean Adventures on the main beach,it`s a great little boat trip that also includes trying snorkeling. Some cyber cafes ranging from €2 to €3 an hour.

Trips to nearby towns by bus or by boat as well as Barcelona. Local radio is 107.8 FM. There is a small bowling alley as well as a few slot machines on the Avda Costa Brava. Also a small crazy golf place nearby (Avda de la Palma). There are travel agents in town. This is more a family resort than Lloret, so quieter. The town is about as safe as they come and unusual for Mainland Europe, cars stop at crossings to let people cross. You can walk South out of the old town along the cliffs for lovely views. Also West up into the pine covered hills. Excellent bus services to North and South to gain access to further wonderful walking. The tourist information office is a very helpful source of walking information and maps.

Go next : Lloret de Mar and Blanes are easily reachable by coach or ferry. Barcelona is a good day-trip idea if you are staying in Tossa for a while, with coaches departing regularly from the town’s coach station.