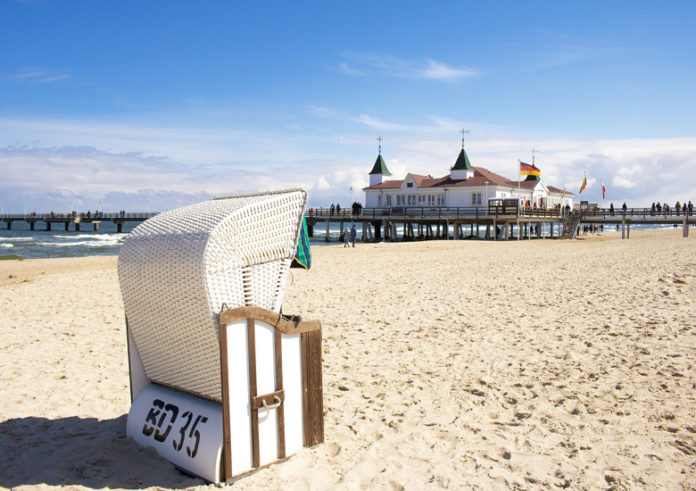 Usedom  is an island in the Baltic Sea belonging both to Germany (larger western part) and to Poland (smaller eastern part). Its seaside resorts are a very popular summer retreat for people from the Baltic Sea region and beyond since the 19th century. Usedom is nicknamed Sunny Island for being the sunniest spot in the Baltic Sea, in all of Germany and Poland.
Cities,

Kaiserbad Heringsdorf (with Ahlbeck and Bansin resort districts)
1 Swinoujscie , half of the island’s population lives here

Other destinations
1 Peenemunde , site where Wernherr von Braun and his team developed and tested the V1 cruise missiles and V2 rockets, the latter the basis for both Soviet and American space programs – destroyed in a bombing raid there is an on site museum there today.

Access : Coordinates: 53.933333, 14.083333 / By train :  Usedom is well connected for travellers throughout the year. The Usedomer Baderbahn connects the island from Stralsund via Wolgast to Swinemunde.  By car :  Bridges connect the island via the federal streets Zustrin (B 110) and in Wolgast (B111).

By plane : Heringsdorf has an airport (HDF IATA) with seasonal flights to German Austrian and Swiss destinations during the summer Lufthansa also serves the island out of its hub at Frankfurt Airport in addition to various flights operated by its subsidiaries. The airport is connected to the beaches by bus.

Talk : You should get by with the German phrasebook. Standard German (Hochdeutsch) is spoken throughout the German portion of the island, while traditional Low German dialects are still alive as well. Polish and some German are spoken on the Polish side. Many employees will understand basic English on both sides. Russian may be known by those schooled through the communist times.

Activities : A guided “Island Safari” tour by 4WD vehicle is available from Usedom Insel Safari which is a locally run company that can tailor routes to specific needs and will take you to the most beautiful parts of the island.

Stay safe : Phosphorus :  Like in other parts of the Baltic Sea, phosphorus from dumped ammunitions is sometimes washed ashore, especially around Peenemunde with its military past. Phosphorus is poisonous, ignites spontaneously when dried and can look deceptively like amber, which leads to occasional accidents. If you collect pieces of amber, don’t keep them in your pocket. Put them into a vessel that you keep away from your body until you are sure it is actually amber and not phosphorus. Extinguish burning phosphorus with sand rather than water.