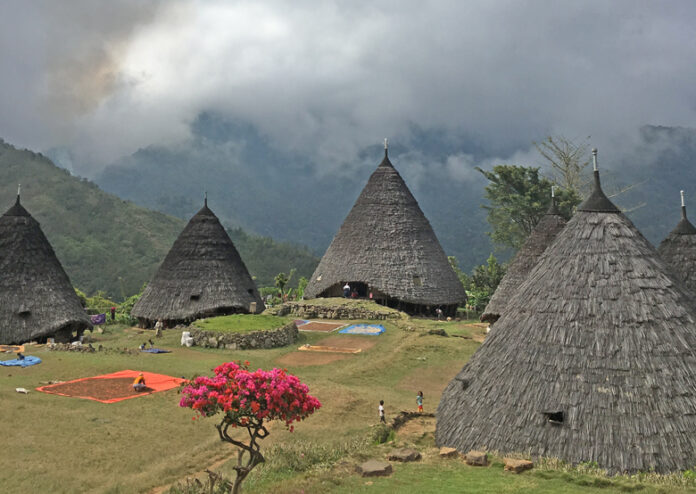 Wae Rebo is a traditional village in Flores, Flores is located in the eastern part of Indonesia.  The village is located at about 1200 m altitude is one of the few villages that has retained the traditional way of life and architecture.

The residents of the village of Waerebo are very friendly to visitors. Along the way from the “basecamp” to the traditional village, visitors will find many coffee and clove plants as local commodities of Manggarai.
Traditional houses are built of unpainted planks, have a circular cone shape and elongated tapered roofs.  Several ritual festivals of this people are held in special ceremonial buildings of the village throughout the year. For example, in August, lios from all over the area come here for a big harvest festival.
The location and existence of this circular cone house makes Vae Rebo a lovely traditional village.Wae Rebo attracts tourists with unusual wood carvings, unusual wooden sculptures decorate the houses of the villagers.

Access : Coordinates: / There is still no other way to get to the village other than to go hiking.expect 3-4 hours and expect a pretty bad trail, especially if it has been raining lately  and is clearly marked. To get to Wa Rebo, you first need to get to Ruteng. It is a small town in West Flores, reachable by bus from Labuan Bayo.

Go next : The market town of Ruteng in the mountains of western Flores and Badjawa / diving tours in Komodo National Park / Labuan Bajo , a growing  city / Batu Cermin,  a beautiful limestone cave.