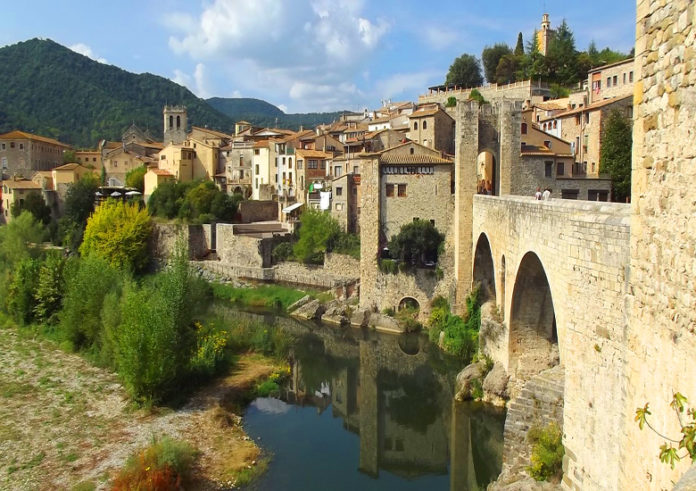 Besalu is a town in the comarca of Garrotxa, in Girona, Catalonia, Spain.

The town’s importance was greater in the early Middle Ages, as capital of the county of Besalu, whose territory was roughly the same size as the current comarca of Garrotxa but sometime extended as far as Corbieres, Aude, in France. Wilfred the Hairy, credited with the unification of Catalonia, was Count of Besalu. The town was also the birthplace of Raimon Vidal, a medieval troubadour.

Besalu was designated as a historical national property (“conjunt historic-artistic”) in 1966. The town’s most significant feature is its 12th-century Romanesque bridge over the Fluvia river, which features a gateway at its midpoint. The church of Sant Pere was consecrated in 1003. The town features arcaded streets and squares and also a restored mikveh, a ritual Jewish bath dating from the eleventh or twelfth century, as well as the remains of a medieval synagogue, located in the lower town near the river. Besalu also hosts the Museum of miniatures created by jeweler and art collector Lluis Carreras.

History : The name Besalu is derived from the Latin Bisuldunum, meaning a fort on a mountain between two rivers. It is also the historical capital of the county of “La Garrotxa”. One key date is the year 894, when Besalu was converted to a county with its own dynasty. The county changed from “L’Emporda” to “El Ripolles”. In the year 1111, Besalu lost its independence, for historical reasons in favor of the county of Barcelona. Centuries later, Besalu started a decadent period, worsened by the redemptions, wars with the French and carlists. In 1966, Besalu was declared a site of historical and artistic importance.

Access : By plane: arriving to Girona (45 km away) or to Barcelona (150 km away). By train: trains from all over Spain stop in Girona and / or Figueres. If you’re traveling from France, there is a train to Figueres. By bus : the bus company Teisa takes you from Barcelona, Calle Pau Claris (1 h 45 min). There are also buses leaving from the Girona bus and train station (45 min) and from the Figueres bus station (30 min). By car: on the A7 motorway. From Figueres (Exit 3) there are about 25 km and from Girona (Exit 6), 30 km. From Barcelona (Girona Exit 6) there are around 133 km.

Go next : Castellfollit de la Roca , a Old town in Spain,with medieval origin part of the province of Girona