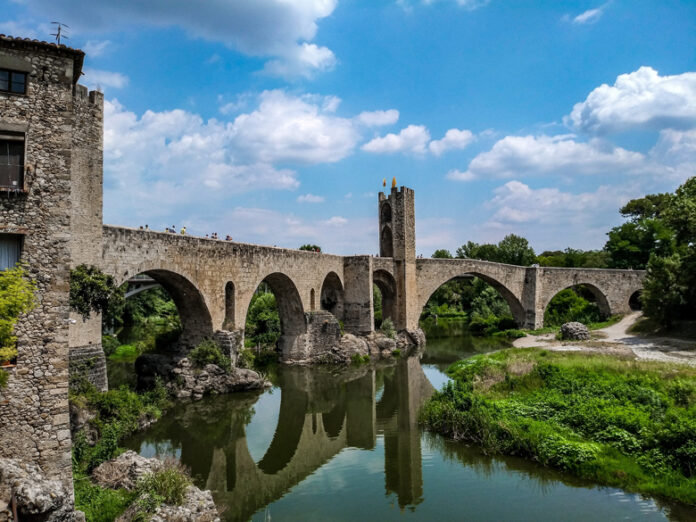 The Besalú bridge is a is a Romanesque fortified entrance bridge that is located in Besalú  -Girona,Catalonia,Spain.
There was probably a bridge at this point as early as Roman times. It is first mentioned in the documents in 1075. In 1284 the bridge was mentioned again in a document in connection with the sale of an orchard, although the bridge was probably located more upstream in the past, where the remains of pillars can still be seen, which are similar to the current bridge that consists of three sections, which are supported together by eight arches made of ashlar stones, with the sections at an angle to each other in plan.

The arches have different spans and are supported by rocks in the river bed. A gate on the city side ensures access to the city. At the end of the westernmost section with four arches, the street is widened to a large square  so that traffic could cross, after two more arches there is a smaller square to cross . The hexagonal tower with the portcullis is located between the two crossing points.
The bridge of Besalú, on the river Fluvià, is the result of several reconstructions, reforms, additions and restorations, done over the centuries.In 1880 the tower in the center and the access portal from the village were demolished to facilitate the passage of machinery necessary for the local industry. Two bows were blown up in 1939
Today The Besalú bridge which can only be used by pedestrians It is listed as an Asset of Cultural Interest at the national level and at the regional level as a Cultural Asset of National Interest, by the  authorities of Catalonia.

Go next : Besalú : A placid medieval town on the inland Costa Brava that has become one of the most visited in the province of Girona due to its undeniable beauty.