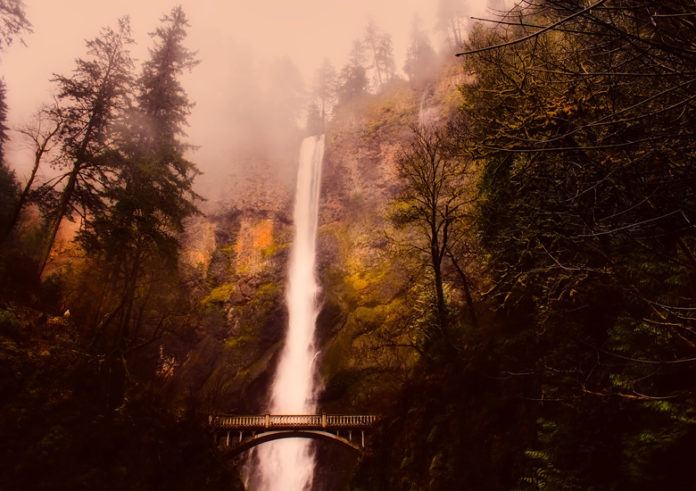 Multnomah Falls is a waterfall located in the Columbia River Gorge, east of Troutdale, between Corbett and Dodson, Oregon, United States.

The waterfall is accessible from the Historic Columbia River Highway and Interstate 84. Spanning two tiers on basalt cliffs, it is the tallest waterfall in the state of Oregon at 620 ft (189 m) in height.

The land surrounding the falls was developed by Simon Benson in the early-twentieth century, with a pathway, viewing bridge, and adjacent lodge being constructed in 1915. The Multnomah Falls Lodge and the surrounding footpaths at the falls were added to the National Register of Historic Places in 1981. Contemporarily, the state of Oregon maintains a switchback trail that ascends to a talus slope 100 feet (30 m) above the falls, and descends to an observation deck that overlooks the falls’ edge. The falls attract over two million visitors each year, making it the most-visited natural recreation site in the U.S. Pacific Northwest.

Access : In contrast to other falls along the Gorge, the Multnomah Falls area is accessible via Interstate 84 east of Troutdale, Oregon, and is a “designated scenic area” by the state of Oregon. The falls are the most-visited natural recreation area in the Pacific Northwest, with over two million annual visitors. The rest area and tunnel under the road (as well as the Union Pacific Railroad tracks) allow Interstate travelers from either direction to stop and visit the falls. During the summer season and holidays the parking lot along the freeway access can fill up very quickly which prompts a gate to come down and a reader board sign along the freeway before the offramp flashes that the parking lot is full.

Footpaths : A paved foot trail  leads to Benson Footbridge, a 45-foot (14 m)-long footbridge that allows visitors to cross 105 feet (32 m) above the lower cascade. After a viewpoint of the upper falls, the trail continues to ascend to an elevation of 785 feet (239 m)  it consists of eleven switchbacks which reach a forested talus slope 100 feet (30 m) above the falls. The trail then descends to an observation deck (elevation 660 feet (200 m) overlooking the falls’ edge, providing visitors a bird’s-eye view of the Columbia Gorge and also of “Little Multnomah”, a small cascade slightly upstream from the “upper” falls, which is not visible from ground level.

There are a number of trail junctions along the footpaths ascending to the falls’ observation deck, which allow access to a 5.4 miles (8.7 km)  trail loop to other nearby waterfalls.  The Mark O. Hatfield Memorial Trail, one of several, starts at the falls and continues through the Oregon side of the Columbia River Gorge to Starvation Creek.