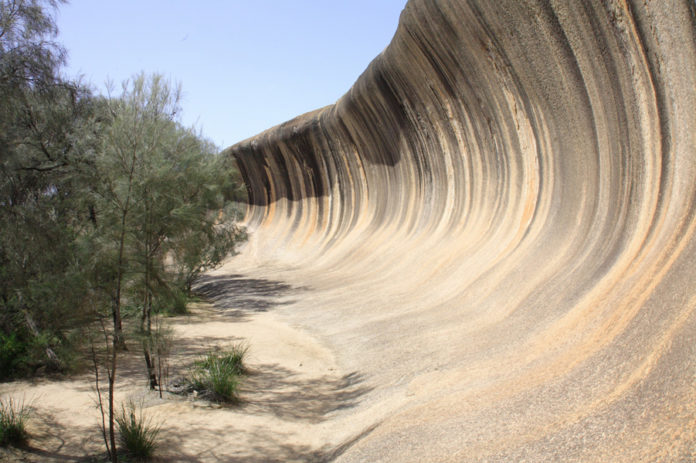 Wave Rock is a natural rock formation made up of ocher granite. Generated by strong erosion, it is found in Australia. Its name derives from its shape, which is reminiscent of a large breaking wave.

The wave rock is a granite rocky outcrop, the rock received its unusual wave-like shape due to deep (underground) chemical processes, which were accompanied by the washing out of soft granite by underground waters. Thus, the inclination of the entire boulder occurred underground even before the rock was pushed to the surface. Under the influence of erosion, washing out and weathering mineral deposits (carbonates and iron hydroxides) from the rock, the rock acquired an unusual striped color, its entire surface is “painted” with vertical stripes of gray, red and yellow.
The Wave Rock is 15 meters high and 110 meters wide, and is 2,700 million years old.
The formation is one of Australia’s most popular natural attractions and is located near Hyden about 350 km east of Perth.

Go next : the small town of Hyden in Western Australia. / Mulka’s cave.