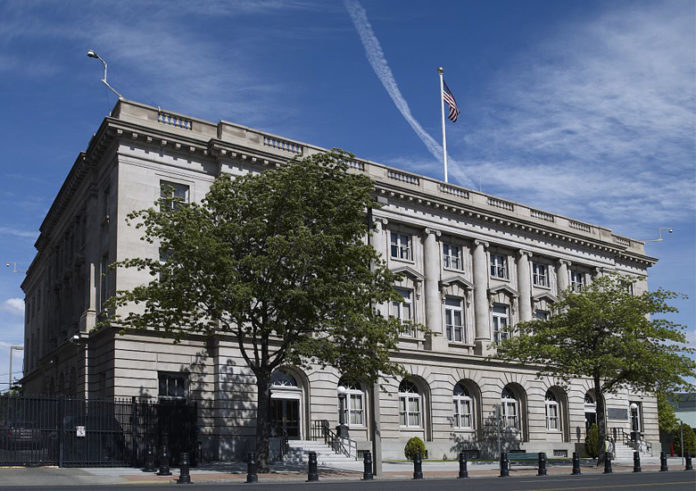 Yakima is a city in the Yakima Valley, part of the Columbia River Plateau region of Washington State.- U.S.A.

It is the county seat of Yakima County.Yakima is about 60 miles (100 kilometers) southeast of Mount Rainier in Washington. It is situated in the Yakima Valley, a productive agricultural region noted for apple, wine and hop production. As of 2011, the Yakima Valley produces 77% of all hops grown in the United States. The name Yakima originates from the Yakama Nation Native American tribe, whose reservation is located south of the city.

Access : Coordinates: 46.6, -120.5 / By plane
1 Yakima Air Terminal (YKM IATA). Is a commuter airport served only by turboprop aircraft operated by Alaska & Horizon Airlines to/from Seattle-Tacoma International Airport and for general aviation. It is the largest airport in the center of the state.
By bus
Greyhound, (bus stop) Brewer Mini Mart / AM-PM Store @ 3922 Fruitvale Blvd (corner of Fruitvale Blvd & N 40th off of US Hwy 12, bus stop is behind the store.). Travels primarily on Interstate 90/82 (Seattle, Ellensburg, Sunnyside, Pasco (Tri-Cities), Stanford OR at I-84). Old downtown Station on 6th St is closed.
BellAir Airporter, (depot) 2518 S 21st (At Ahtanum Rd, south of the airport). Goes from Sea-Tac to Cle Elum, Ellensburg & Yakima. Additional stops at the Yakima Air Terminal @ 2400 West Washington Ave (under canopy in front of the terminal building) and Smittys (Log Cabin) Cafe & Conoco 76 @ 3508 Fruitvale Blvd
People for People Yakima County Community Connector, (bus stop) downtown Yakima Transit Center @ 105 S 4th St (along S 4th St btwn E Walnut & Chestnut). goes east from Yakima to Wapato, Toppenish, Zillah, Granger, Sunnyside, Grandview and Prosser along the I-82/US 97/US 12 corridor in Yakima and Benton Counties.
Yakima-Ellensburg Commuter (Yakima Transit Rt#11), (bus stops) Yakima Air Terminal, Yakima Valley Community College and downtown Yakima Transit Center @ 105 S 4th St. Commuter bus between Ellensburg and Yakima funded by Central Washington University and Yakima Transit.
Yakima Transit, Downtown Transit Center @ 105 S 4th St (along S 4th St btwn E Walnut & Chestnut). Yakima Transit operates local buses in and around Yakima (city) on Rt #1 through 9; from Selah in the Selah Valley north of town on Rt #10 and from Ellensburg on Rt #11. Take the #3 or #9 bus going eastbound to get to downtown from the Greyhound and the Bellair stops along Fruitvale in the northwestern part of town. Take the #7 or 9 from the airport into town.

By car
Yakima is located along Interstate 82, approximately 143 miles southeast of Seattle, 204 miles southwest of Spokane, and 80 miles northwest of the Tri-Cities (Richland-Kennewick-Pasco).

From Seattle, take I-90 East to the I-82 off ramp, Exit 110, just beyond the exit to Ellensburg. Keep right on I-82 East and take exit 31A-31B to North 1st Street / Naches.
From Spokane, take I-90 West until exit 110, I-82 East, continuing until exit 31A-31B to North 1st Street / Naches.
From the Tri-Cities, take I-82 West until exit 33. Merge onto East Yakima Avenue.
A scenic alternative route from the Ellensburg region is the old canyon highway, SR 821, a two-lane road that winds through the Yakima River gorge between Exits 3 and 26, bypassing the Interstate over the mountain ridges. During the daytime, the views are lovely and there are several spots midway to stop, fish, and even camp. Be cautious of rocks on the road, though, and stick to the Interstate at night.

The Capitol Theatre. Is an arts theatre that hosts an array of performances from broadway shows, comedic acts, and musical talents. Recent performers include Bill Cosby and Joe Bonamassa.
The Seasons Performance Hall. Is a premier concert and arts venue that offers an incomparable selection of musical performances by some of the most thrilling national and international performers of today.
Yakama Legends Casino. Yakama Legends Casino features all of your favorite Vegas-style games with a hometown flair! Featuring 1,400 of the newest, hottest slots around, there is no doubt that your favorite machine is waiting. If tables are your game, they feature a great mix including Blackjack, Craps, Roulette, Pai Gow, 3-Card Poker, Spanish 21 and Ultimate Texas Hold’em. There is also live Keno with payouts up to $50,000.
Yakima Valley SunDome. Is an events arena that host a variety of shows and musical performance. Recent performers include Elton John and Carrie Underwood.
Yakima Valley Wine Tours. Yakima is in wine country and there are a plethora of wineries either in, or within close proximity, to the city

Go next : Boulder Cave (32 miles west of Naches. Take State Route 410 to Milepost 95.4, turn left on paved road.). April 1 – Oct 31. Unlike many Washington caves, Boulder Cave is formed from volcanic rock which was eroded away and collapsed. A fun boulder scramble, suitable for kids. Bring a flashlight. The short loop trail has a branch which is wheelchair accessible. Day use only. Part of Wenatchee National Forest. $5/vehicle, $15/bus.
White Pass Ski Resort, 48935 US Highway 12 (20 miles east of Packwood, 50 miles west of Yakima, on US highway 12). Ski area centrally located to a variety of cities in Washington state