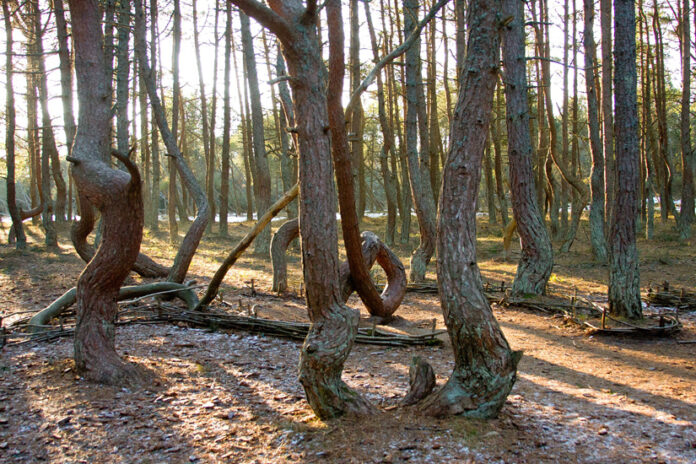 The Dancing Forest is a unique place located in the Curonian Spit National Park ( Curonian Spit A nearly 50-km-long spit stretching between Zelenogradsk and the Lithuanian border, separating the Baltic Sea from the Curonian Bay, it includes pine forest, hiking paths, and beaches ) in the Kaliningrad Region.Russia.
This forest is striking in that almost all of its pines are bent, branched or even twisted into a ring in a bizarre way.Trees of this anomalous shape are not found in the entire park, but only in one part of it.

The Dancing Forest is one of the three main attractions of the Curonian Spit.Today there is a tourist route called “Dancing Forest”. It is located on the 37th km of the Curonian Spit, about 5 km from Rybachye. The route is less than a kilometer long, and walking in the forest is strictly prohibited. Walking is allowed only on wooden walkways.
The amazing forest constantly attracts the attention of tourists who come here from all over the world.

Access : Coordinates: 55.18, 20.861944 / You can get to the Curonian Spit by taxi, bus or private transport.The forest is located on the 38th kilometer of the road that runs along the spit towards Lithuania. / By car, there is  highway 27A-076. / Not far from the beginning of the route there is a bus stop called “Dancing Forest”. Buses to and along the Curonian Spit run from Kaliningrad, Zelenogradsk and Svetlogorsk 3-4 times a day.

Activities : sightseeing / photo opportunities / trekking, A trip to it can be combined with a visit to the dunes and ornithological reserve.

Go next : the village of Rybachiy / Kaliningrad : a Russian city on the Baltic Sea, also known by its original German name, Königsberg,  the capital city of Kaliningrad Oblast in Russia.