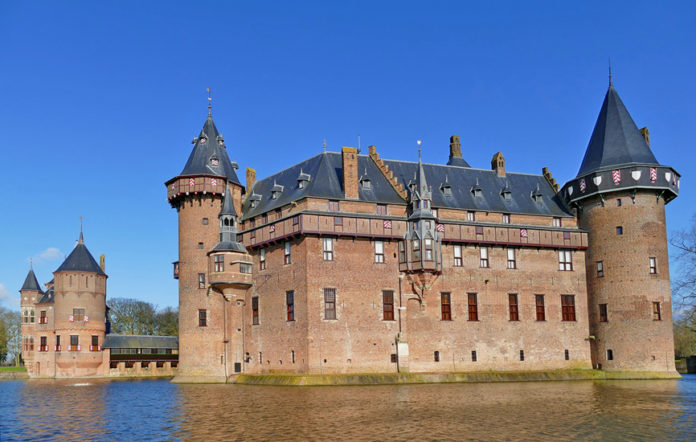 De Haar Castle (Dutch: Kasteel de Haar) is located in Utrecht, Netherlands, near the village of Haarzuilens. The current buildings, all built upon the original castle, date from 1892 and are the work of Dutch architect P.J.H. Cuypers, in a Neo-Gothic restoration project funded by the Rothschild family

Original site :  The oldest historical record of a building at the location of the current castle dates to 1391. In that year, the family De Haar received the castle and the surrounding lands as fiefdom from Hendrik van Woerden. The castle remained in the ownership of the De Haar family until 1440, when the last male heir died childless. The castle then passed to the Van Zuylen family. In 1482, the castle was burned down and the walls were torn down, except for the parts that did not have a military function.

These parts probably were incorporated into the castle when it was rebuilt during the early 16th century. The castle is mentioned in an inventory of the possessions of Steven van Zuylen from 1506, and again in a list of fiefdoms in the province Utrecht from 1536. The oldest image of the castle dates to 1554 and shows that the castle had been largely rebuilt by then. After 1641, when Johan van Zuylen van der Haar died childless, the castle seems to have gradually fallen into ruins. The castle escaped from total destruction by the French during the Rampjaar 1672.

1892 restoration :  In 1887, the inheritor of the castle-ruins, Etienne van Zuylen van Nijevelt, married Helene de Rothschild, of the Rothschild family. Fully financed by Helene’s family, the Rothschilds, the couple set about rebuilding the castle from its ruins. For the restoration of the castle, the famous architect Pierre Cuypers was hired. He would work on this project for 20 years (from 1892 to 1912). The castle has 200 rooms and 30 bathrooms, of which only a small number on the ground floor have been opened to be viewed by the public. In the hall, Cuypers placed a statue with his own image in a corner of the gallery on the first floor.

The castle was equipped by Cuypers with the most modern gadgets, such as electrical lighting with its own generator, and central heating by way of steam. This installation is internationally recognized as an industrial monument. The kitchen was for that period also very modern and still has a large collection of copper pots and pans and an enormous furnace approximately 6 metres long, which is heated with peat or coals. The tiles in the kitchen are decorated with the coats of arms of the families De Haar and Van Zuylen, which were for this purpose especially baked in Franeker. Cuypers marked out the difference between the old walls and the new bricks, by using a different kind of brick for the new walls. For the interior Cuypers made extensive use of cast iron.

For the decoration of the park, the village Haarzuilens, except for the town church, was demolished. The inhabitants were moved to a place a kilometre away, where a new Haarzuilens arose and where they lived as tenants of the lord of the castle. This new village was also built in a pseudo-medieval style, including a rural village green. The buildings were for the most part designed by Cuypers and his son Joseph Cuypers. From 2000 on, the estate is partly owned by Natuurmonumenten.

Fairs :  The castle terrain is regularly used for fairs and markets, such as the Elf Fantasy Fair.

Go next : Naarden ,  a fortress  Star-shaped town in the Dutch province of North Holland.