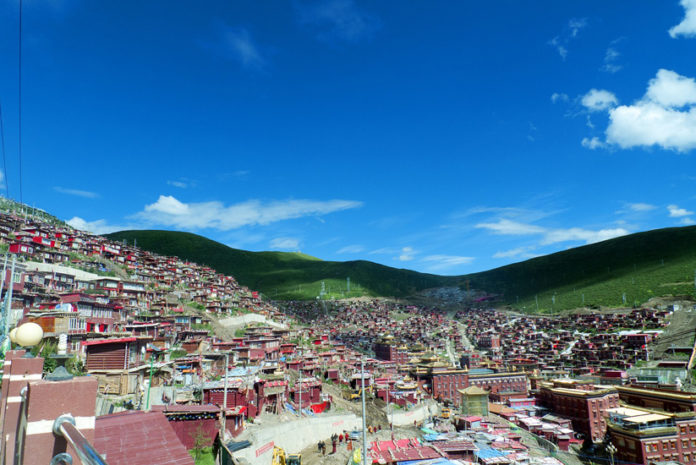 Seda or Sertar  is a remote county of Ganzi prefecture, Sichuan Province, China. It is one of the 18 counties under the administration of the Garze Tibetan Autonomous Prefecture. The county has an area of 9,340 km². It is located about 780 km from Chengdu.

Understand : Sertar means “golden horse” in Tibetan. It is in the southeast of the Tibetan Plateau in the historical region of Kham. It is home to the Larung Gar Buddhist Institute, the largest Tibetan Buddhist institute in the world. The institute was founded by lama Jigme Phuntsok in 1980 and started off with just a few monks. It is home to tens of thousands of monks and pilgrims from around the world. Seda comprises 17 towns and 66 villages. Government opposition to expansion of the institute and protests in 2012 may explain Sera’s status as a “closed city”.

From Chengdu, there are shared SUVs (4WD  Toyota Prado/Pajero or Landcruiser) that leave from in front of Kangding Hotel, Wu Hou Ci District (Tibetan area in Chengdu). ¥300-500 per seat, depending on seat position, next to the drivers is ¥500). They depart from Wuhouci around 4 am, and arrive in Seda town around 5 pm. It is also possible to take a 4WD from Jiuzhaigou direct to Seda for ¥1800. It takes around 14 hours.

Seda and Larung Gar sit at around 4000 metres above sea level: make sure you are acclimatized to high altitudes.

Attractions : Larung Gar Buddhist Institute . the largest Tibetan Buddhist institute in the world 15 km from Seda town. A permit may be required for non-Chinese nationals to enter the institute.  Dongga Gompa Monastery on a hill along Ganzi-Seda road. Marked by a big pagoda, 5 km before the town. Experience Tianzang funeral/sky burial . For the Tibetans, Tianzang is the most solemn funeral. All Tibetans hope to have a Tianzang funeral. In most Tibetan areas, Tianzang funerals are not open to the visitors. Seda Tianzang Site is located at the mountainside (over 4000m) near to the Academy. Under normal condition, the funeral is held between 13:00 and 16:00 each day.

Around the Buddhist Academy, lights shine on the mountains and valley from thousands of Buddhist dormitories.
Red dormitories of Lamas and Juemu . Thousands of Red Buddhists’ dormitories are scattered across the valley. Standing on the top of mountain in the daytime, you will overlook the red house areas which are distributed randomly, but encircle the Wuming Academy, which symbolizes the power of Buddhism

Activities :  Larong Wuming Buddhist Academy is the world’s largest active Tibetan Buddhist academy. Plan to spend a half day exploring the academy, and then witness a Tianzang funeral between 13:00 and 16:00. In the evening, climb to the top flatform, near to Larong Hotel, to look down at the valley and its lights

Closed city : As of June 2016, Seda region was officially closed for foreign travelers. Police checkpoint is in the town/village of Wengda, on the crossroad towards towns of Ganzi and Luhuo, and access is forbidden to all foreign travelers for the time being.