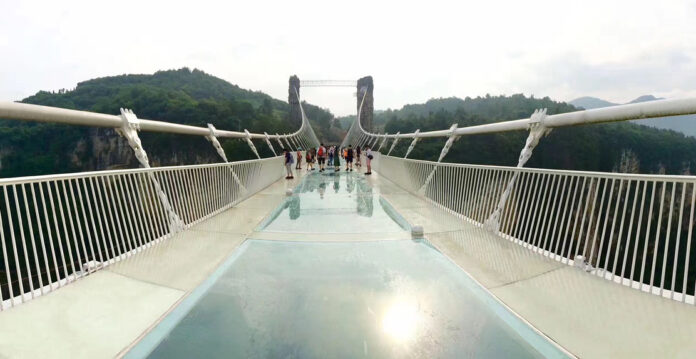 The Zhangjiajie Glass Bridge is a bridge in the Wulingyuan countryside in Zhangjiajie, China.

The bridge spans the canyon between two mountain cliffs in the Zhangjiajie National Forest Park in China’s central Hunan Province. It opened on August 20, 2016 and is a popular tourist attraction. Their load capacity is designed for up to 800 visitors at the same time. It was designed by the Israeli architect Haim Dotan.
The bridge, built as a tourist attraction, has a transparent glass floor. It is the longest and highest glass-bottomed bridge in the world.

Go next : The mountains of Zhangjiajie inspired the movie Avatar at the Zhangjiajie National Forest Park , a national park of the city of Zhangjiajie. It is located in the Hunan Province, in the central east of the People’s Republic of China.