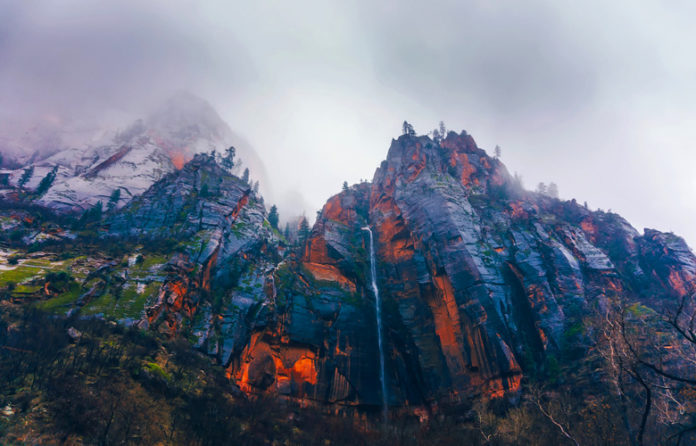 A prominent feature of the 229-square-mile (590 km2) park is Zion Canyon, which stretches 15 miles (24 km) long and spans up to half a mile (800 m) deep. It cuts through the reddish and tan-colored Navajo Sandstone by the North Fork of the Virgin River. The lowest point in the park is 3,666 ft (1,117 m) at Coalpits Wash and the highest peak is 8,726 ft (2,660 m) at Horse Ranch Mountain. Located at the junction of the Colorado Plateau, Great Basin, and Mojave Desert regions, the park has a unique geography and a variety of life zones that allow for unusual plant and animal diversity. Numerous plant species as well as 289 species of birds, 75 mammals (including 19 species of bat), and 32 reptiles inhabit the park’s four life zones: desert, riparian, woodland, and coniferous forest. Zion National Park includes mountains, canyons, buttes, mesas, monoliths, rivers, slot canyons, and natural arches.

Human habitation of the area started about 8,000 years ago with small family groups of Native Americans, one of which was the semi-nomadic Basketmaker Anasazi (300 CE). Subsequently, the Virgin Anasazi culture (500 CE) and the Parowan Fremont group developed as the Basketmakers settled in permanent communities. Both groups moved away by 1300 and were replaced by the Parrusits and several other Southern Paiute subtribes. Mormons came into the area in 1858 and settled there in the early 1860s.

In 1909, President William Howard Taft named the area Mukuntuweap National Monument in order to protect the canyon. In 1918, the acting director of the newly created National Park Service, Horace Albright, drafted a proposal to enlarge the existing monument and change the park’s name to Zion National Monument, a name used by the Mormons. According to historian Hal Rothman: “The name change played to a prevalent bias of the time. Many believed that Spanish and Indian names would deter visitors who, if they could not pronounce the name of a place, might not bother to visit it. The new name, Zion, had greater appeal to an ethnocentric audience. On November 20, 1919, the United States Congress established the monument as Zion National Park, and it was signed by President Woodrow Wilson. The Kolob section was proclaimed a separate Zion National Monument in 1937, but was incorporated into the park in 1956.

Activities : Guided horseback riding trips, nature walks, and evening programs are available from late March to early November. The Junior Ranger Program for ages 6 to 12 is active from Memorial Day to Labor Day at the Zion Nature Center. Rangers at the Zion Canyon Visitor Center and the smaller Kolob Canyons Visitor Center can help visitors plan their stay. A bookstore attached to the Zion Canyon Visitor Center, run by the Zion Natural History Association, offers books, maps, and souvenirs for sale, with proceeds benefiting the park. The Grotto in Zion Canyon, the Visitor Center, and the viewpoint at the end of Kolob Canyons Road have the only designated picnic sites.

Trails : Seven trails with round-trip times of half an hour (Weeping Rock) to 4 hours (Angels Landing) are found in Zion Canyon. Two popular trails, Taylor Creek (4 hours round trip) and Kolob Arch (8 hours round trip), are in the Kolob Canyons section of the park, near Cedar City. Hiking up into The Narrows from the Temple of Sinawava is popular in summer. However, hiking beyond Big Springs requires a permit. The entire Narrows from Chamberlain’s Ranch is a 16-mile one way trip that typically takes 12 hours of strenuous hiking. A shorter alternative is to enter the Narrows via Orderville Canyon. Both Orderville and the full Narrows require a back country permit. Entrance to the Parunuweap Canyon section of the park downstream of Labyrinth Falls is prohibited. Other often-used backcountry trails include the West Rim and LaVerkin Creek. The more primitive sections of Zion include the Kolob Terrace and the Kolob Canyons.

Zion is a center for rock climbing, with short walls like Touchstone, Moonlight Buttress, Spaceshot, and Prodigal Son being very popular.

Camping and lodging : Lodging in the park is available at Zion Lodge, located halfway through Zion Canyon. Three campgrounds are available: South and Watchman at the far southern side of the park, and a primitive site at Lava Point in the middle of the park off Kolob Terrace Road. Overnight camping in the backcountry requires permits.

amenities : Lodging, food, and entertainment are also offered on the east side of the park along the Zion–Mount Carmel Highway and in Mount Carmel Junction.

Adjacent to the park on the south is the town of Springdale, Utah, which offers services such as lodging, food, and entertainment.

Driving through the east side of Zion to U.S. Route 89 allows access to Bryce Canyon National Park in the north or to the north rim of the Grand Canyon in the south. Due to the narrowness of the Zion–Mount Carmel Tunnel, RVs and buses must obtain a special pass and can only drive through the tunnel during limited hours.