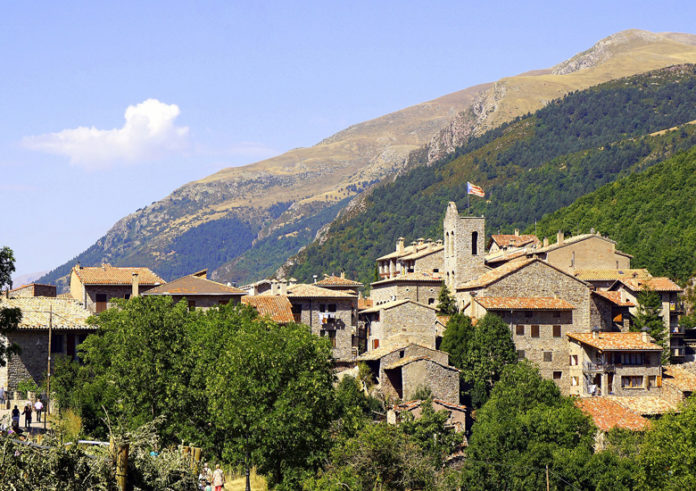 Castellar de Nuch is a village  located on a southern foothills of the Pyrenees, northern end of the province of Barcelona, within the region of Bergada, autonomous community of Catalonia, Spain.
In the tonic of the places in the area, this town maintains the essence, with particularities, of the Pyrenean villages It is located at 1.395 m. of altitude , this place is at the gates of the largest natural reserve in Catalonia, El Cadi Moixero,
described by the Ministry of Tourism one of the most beautiful villages in Spain with great respect for the use of native materials stone, wood, tiles where you can admire them in  medieval and Romanesque constructions.

Tip : In the 19th century Castellar de Nhug had become a famous town inhabited by smugglers.- in this small town they make the best sausages made by hand – this place is famous for  the giant Croisants weighing more than 1 Kg where made.

Attractions :
– Las Fuentes del Llobregat/the Llobregat River springs ,which flows into Barcelona , The water comes out of the limestone rock and forms a waterfall ,walk from the village will take us to the birth of the Llobregat River and it takes about 30 min,A viewpoint has been enabled to see the central waterfall and enjoy the strength and beauty of the water.
– Church of Santa Maria de N’hug ,Plaza de la Iglesia, 08696 Castellar de n’Hug, Spain , The Church of Santa Maria de N’hug is another example in the Pyrenees of the great splendor of Medieval Art.
– Nucleo Historico , Plaza del Ayuntaniento, 08696 Castellar de n’Hug, Spain , Historic Pyrenean village , very well maintained place with spectacular views. They have a very good bread and sausages.
– Museu del Ciment Asland-he Asland del Clot del Moro cement factory , Paratge del Clot del Moro, s/n, 08696 Castellar de n’Hug, Spain , a restored industrial space, The Asland cement factory, located in the area known as Clot del Moro in the town of Castellar de n’Hug, closed down more than 30 years ago. a notable example of modernista industrial architecture.
– Iglesia de Sant Vicenc de Rus , 08696 Castellar de n’Hug, Spain , Excellent church of medieval Romanesque style , inside and a copy of the mural paintings of the apse. In the side chapel there are original gothic mural paintings.
– Pastor’s Museum , Museum dedicated to the shepherds work , the shepherd’s work, one of the most beloved and at the same time the most traditional trades in the mountain areas ,open : September to June: Weekends and holidays from 11 a.m. to 2 p.m.-July and August: Weekends and holidays from 11 to 14 and from 17 to 19 h.
– the monument to the Catalan High Dog , In 1987, the monument to the Catalan High Dog was inaugurated, on the occasion of the 25th anniversary of the International High Dog Competition.
– Tourist railway of Alt Llobregat , The Alt Llobregat Tourist Railway, also known as the Ciment Train, links the Pobla de Lillet with the Clot del Moro area, in the municipality of Castellar de n’Hug. It has a route of 3.5km,The railway was built by the General Company d’Asfalts i Portland “Asland” to transport cement from the Clot del Moro factory. The route began in the same factory and went to Guardiola del Bergueda, where it was linked to the Ferrocarrils Catalans and where the cement and other merchandise transshipments were made.

Events : On August 15th the festival of tourism is celebrated with activities such as: karaoke, havana singing, dancing and children’s games./ September 28 and 29-The festival of Castellar de N’hug is celebrated at the end of September, coinciding with San Miguel /
/ International Shepherd Dog Competition : on the last Sunday of August ,Due to the agricultural origin of this high mountain town and it is also part of the Championship of Shepherd Dogs of the Catalan Counties.