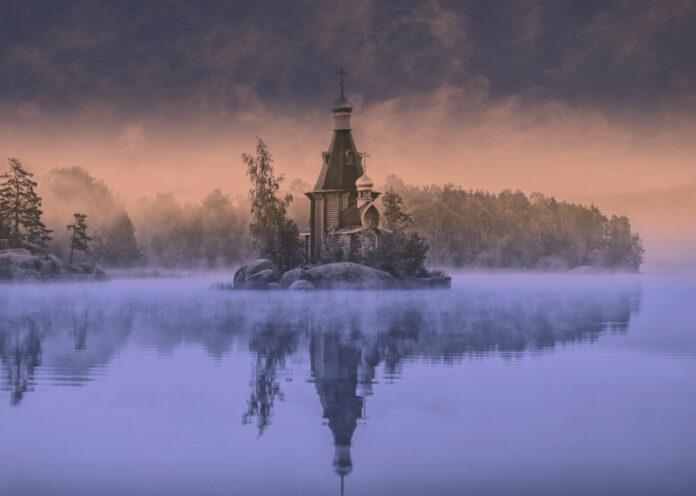 The temple  has a spatial planning scheme, traditional for Russian architecture. The octagon, covered with a tent with a dome on a high drum, is adjoined from the west by a vestibule, and from the east by a rectangular apse, also crowned with domes. There is a legend why the religious building was dedicated in honor of the Apostle Andrew – the patron saint of fishermen and sailors. According to legend, he baptized pagans in the waters here, which  is more a myth than a truth.
For a long time, the island, but which the temple stands, was connected to the coast by a ferry line. Several years ago, a massive bridge was built, breaking the mysterious detachment of this place.
Despite its young age, the shrine is listed in the Guinness Book of Records, because it has no other in the world: it rises on a foundation of monolithic rock. The prototype of the architectural solution was the Church of the Ascension in Kolomenskoye.

Access : Coordinates: 60.877078, 29.825059 / Address: 188765, Leningrad region, Priozersk district, pos. Melnikovo, Kalinin street, building 1a. / From St. Petersburg  drive north along the highway A-121 to the village of Sapernoe, then turn towards Melnikovo at the sign. Soon after the village of Vasilievskoye, and 400 m after the bus stop “4th km” there will be an exit to the parking lot. You should walk another 200 m to the river and the temple.

Activities : sightseeing / You can not only take pictures of this incredible architectural structure from all angles, but also get to the service in the temple.