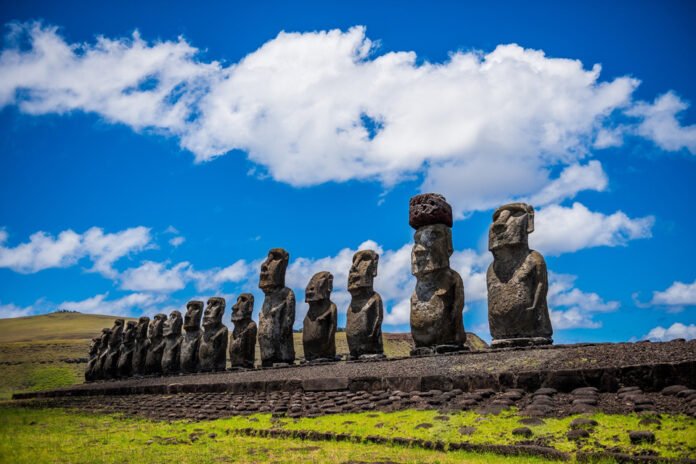 Moai are monolithic human figures carved from stone on Easter Island or Rapa Nui , Chile.. Easter Island  is the most remote inhabited island in the world, is located in the Pacific Ocean, at a distance of almost 4,000 km from South America.  This is Easter island ( Isla de Pascua, Rapa Nui) – an amazing place, the birthplace of moai.

The island is famous for its extinct civilization, leaving behind mysterious statues -stone idols – moai . In 1995, Rapanui National Park (Easter Island) became a UNESCO World Heritage Site.
The overwhelming majority of “statues” were cut out of the rock of the Rano Raraku volcano. The largest (unfinished) statue measured about 20 meters and weighed 270 tons. Moai – “statues” were delivered to the coast in a completely incomprehensible way, where they were installed with their backs to the ocean, facing inland. A total of 997 moai are recorded on the island.

The exact age of the statues is still unknown today due to the lack of written records. There are indications that stonemasonry developed as early as the first settlement phase on Easter Island ,the time of which is set differently depending on the doctrine, between 400 and 1200 AD.
It is known that moai were considered to be containers of a special magical power – the mana of the Rapanui ancestors. Outwardly, moai are strikingly different from each other, there are several types of statues, Despite extensive research, its real purpose and the exact time of its construction are still debated among experts. Today it is assumed that they represent famous chiefs or universally revered ancestors who functioned as a link between this world and the other.
Despite its small population and its remote location, Rapa Nui  is a popular travel destination, especially because of the sculptures created by the indigenous people centuries ago, the moai, which can be found all over the island.

Access : Coordinates: /  Easter Island or Rapa Nui is the westernmost island of Chile and is located in Polynesia.  / The only regular flight to Easter Island is provided by the Chilean airline LAN Airlines, which fly from Santiago to Tahiti, making a stopover on Easter Island.  you can also get to Easter Island by direct flight from the capital of Peru, Lima. / The island’s attractions are accessible by cars,  taxis, rental cars, and bikes.

Activities : sightseeing / photo opportunities, There is an observation deck on the Rano Kao volcano / trekking / Diving with various companies, including coral reefs / guided tours around the island / Surfing in the numerous bays.

Go next : Anakena is the most famous beach on the island / Te-Pito-te-Henua , is a ceremonial platform on an island made of round stones.